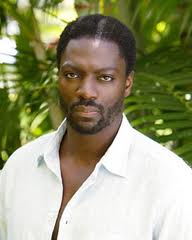 "You get my name wrong and I'll sue you".

When Adewale Akinnuoye-Agbaje was starting his career, he must have received similar advice. Amazingly, he did not take it and continues to be known by his rather wonderful birth name. Nigerian names have popped up before in our blog, but this one probably takes the Most Challenging Spelling of a Public Figure’s Name award by some distance.

Mr. Akinnuoye-Agbaje is not just an actor though, he also has a Master’s degree in Law from the University of London, making him probably the only person appearing in Ace Ventura: When Nature Calls with a graduate degree.

Perhaps explaining his relaxed stance to people’s difficulty in spelling his name, Akinnuoye-Agbaje is a practicing Buddhist. He is sometimes referred to in film credits as just “Adéwale”, although it is unclear if this is a request on his part, or just the producers of the credit sequences giving up after the first three syllables.