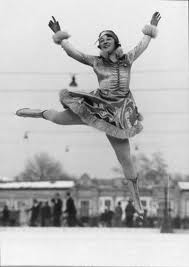 To be perfectly honest, I am no expert on figure skating, but I do know its contributions to the field of funnynameology are substantial. Today’s subject, two-time Olympic silver medalist Friederike “Fritzi” Burger has provided a sizeable contribution to our cause.

Throughout the 1920’s and 30’s, the Austrian-born Ms. Burger was the second-best figure skater in the world. She was stuck in a fierce competition with a Sonja Henie, a Norwegian skater who, according the New York Times, collected a scarcely believable 1473 trophies in her career, before moving to the States and becoming a movie star and collecting a fortune in excess of $50 million. Some people were just born to succeed.

In an interview in the 90’s, Burger even dryly remarked that Henie was in it to out-do her in everything:

“I had two husbands. She even beat me at that. She had three.”

One field in which Fritzi Burger unquestionably defeated Sonja Henie was in the field of funny names. One of her Olympic teammates from Austria was Herma Planck-Szabo, who did beat Henie  in the Winter Olympics in 1924 (although the Norwegian was only 11 years old at the time). In 1930 Burger won her sole gold medal in first European Championships for the sport, finishing ahead of fellow countrywoman Ilse Hornung. See, didn’t I say figure skating is full of funny names?

Burger added to her funny-name glory by marrying Shinkiki Nishikawa, the grandson of a Japanese pearl tycoon. At the onset of the Second World War she disappeared – only reappearing in public nearly fifty years later, when a New York Times reported tracked her down in a small town in Maine where she had settled with her second husband.

Burger died in 1999 at the age of 89 but her great name lives on in the pages of sports history journals and now, in this well-deserved entry in the Funny Names Blog.

Co-founder of the Funny Names Blog, Hawaiian shirt enthusiast, and holder of a funny name himself with too many vowels for any sensible person. Currently residing in San Diego, California, scouring through obscure documents on a hunt for more funny names. www.funnynamesblog.wordpress.com
View all posts by Arto →
This entry was posted in Uncategorized and tagged athletes, austria, figure skaters, funny names, historical figures, history, humor, olympians, sports. Bookmark the permalink.