Carrie Amelia Moore Nation (1846-1911), had a Moore punny name than any of us can ever dream of having. But there was nothing funny (haha at least not in the traditional sense – she may have been “funny peculiar”) about the self-proclaimed “anti-souse queen.”

Don’t know what that means? Well, to sum it up succinctly, she hated alcohol, and people who drank it. After her first husband died of alcoholism in 1869, Nation began a journey which would lead to her becoming the most famous member of the pre-Prohibition temperance movement. 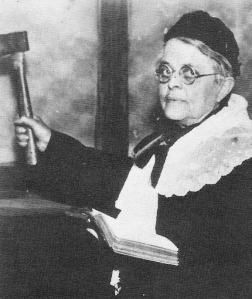 Nation with hatchet, Bible, and fashionable spectacles. What a spectacular photograph!

Believing she had been given a divine ordination to destroy bars and their contents, Nation embarked on a multi-state mission to raid pubs, destroy their fixtures, and demolish their libations, while simultaneously singing hymns and saying prayers. Originally using rocks in these efforts, Nation switched to using hatchets, which would become her trademark, after her second husband jokingly recommended them, claiming they would cause more damage. Nation replied, “that is the most sensible thing you have said since I married you.” Not surprisingly, the couple later divorced. It was for these “hatchetations” that Nation would become most famous. She was arrested over 30 times for her antics, but was able to pay all of her fines through speaking fees and by selling souvenir hatchets.

Fashioning herself as “a bulldog running along at the feet of Jesus, barking at what He doesn’t like,” Nation reportedly applauded the assassination of president William McKinley (who she believed was a secret drinker), believing that his death was a “tippler’s just desserts.”

13 Responses to Carrie A. Nation