James Garfield could have been one of our greatest presidents, but his promising career was tragically cut short after just 200 days. But for those in the know, all signs pointed to potential greatness. He supported education reform, civil rights for African Americans, and the development of new agricultural technology. 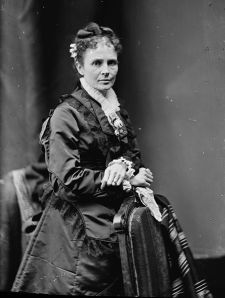 A brilliant man, he spoke several languages and was ambidextrous. With a pen in each hand, he could reportedly use write the same thing in two different languages simultaneously. He juggled Indian clubs for exercise. Raised by a widow, he worked his way up the ladder as a janitor, carpenter, teacher and preacher before entering politics. He came up with a novel proof of the Pythagorean formula using a trapezoid…while sitting in the U.S. Senate. He also served in the Union Army during the Civil War.

What all this points to is that such a remarkable president should have an equally remarkable first lady, and this was certainly the case.

Lucretia “Crete” Rudolph met James A. Garfield when they were classmates at Geauga Seminary, and then she followed him to a neat-sounding place called the Eclectic Institute.  She was described as “somewhat plain in appearance,” but Garfield was “attracted to her keen intellect and appetite for knowledge” and they began dating and eventually married.

That dapper-looking kid became an architect. Meanwhile, we're still waiting for Lucretia's dress to come back in style.

Over the years, while Crete was working as a schoolteacher, they had five children.  Three of their sons became lawyers, their fourth became an architect, and their daughter Mary “Mollie” Garfield Stanley-Brown married a White House secretary.

Lucretia and James shared intellectual interests, and became nearly inseparable, often entertaining guests with intellectually engaging gatherings. After her husband was unexpectedly elected president, they brought a happy family to Washington. Lucretia “Crete” Rudolph-Garfield was considered an excellent first lady, but soon contracted malaria, and while she was convalescing, her husband was shot by Charles Guiteau, a delusional man whom Garfield had denied a government position.

As President Garfield fought for his life, Crete’s devotion gained her the sympathy of the nation. After his passing, she lived a private but active life for over three decades, developing the James Garfield presidential library to preserve their impressive legacy.