(Dave’s Note: Today’s post is a special one. Not only am I writing about one of my all-time favorite people, but it also marks the first new post I’ve written in over a month. I just took the MCAT yesterday, and since I knew I’d need a few 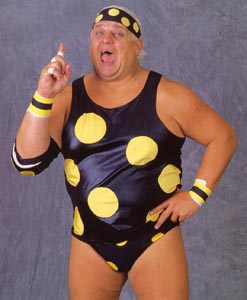 weeks of uninterrupted study time, I had written a dozen posts in late April and scheduled them to post over the past six weeks. It’s great to be back in action after being a ghost for so long. Without further ado, I present Virgil Runnels, Jr. and a story of me meeting a living legend.)

Some people get a lot of good breaks in life; others have to work hard for everything that comes to them. Today’s honoree is from the latter category.

Virgil Riley Runnels, Jr. was born in Smyrna, Georgia and raised in Texas, he was the son of a plumber (presumably named Virgil Runnels, Sr). Growing up in a lower-middle class family, Runnels dealt with weight problems from an early age. He also had a very noticeable lisp, which he would mask by adopting an accent that someone once compared to a “jive-talking black southern homosexual of some kind.”

With all these strikes against him, he seemed like the last guy you’d expect to become a pro wrestler – a field whose job description consists of extraordinary athleticism, good microphone skills, and a looking good in spandex.

But Virgil Runnels, Jr would not be deterred. He branded himself as Dusty “The American Dream” Rhodes and basically played himself en route to 10+ world championships, two consecutive PWI Wrestler of the Year awards (an award Michael Hickenbottom somehow didn’t win once), and election to the NWA and WWE Halls of Fame.

As it turned out, Dusty Rhodes had so much charisma, he didn’t need enunciation skills, or a handsome physique, or any athletic gifts. American fans associated with him, and fell in love with the character’s “son of a plumber” back story, infectious enthusiasm, and the remarkably creative lines he delivered in his trademark Texas-tinged southern jive. He became one of the sport’s stars, engaging in a marquee, long-term rivalry with the much more gifted “Nature Boy” Ric Flair during an era when wrestling grew from a series of regional promotions to a nationally-televised athletic spectacle.

His character was so good that when the World Wrestling Federation became the industry’s clear leader in the late 80’s and early 90’s, they brought in Dusty Rhodes as a polka dot-wearing caricature of himself, having him star in a series of vignettes where “The American Dream” played the bubbliest, darn-tootin’ happiest blue collar worker in a series of odd jobs. Except Dusty probably wasn’t acting, because his infectious excitement and charisma came through whether he was delivering “pig’s feet pizza, with a little snout on the side”, serving as a sombrero-wearing taco shop employee, trash collector, or the mythical “gas station attendant who loves his job”, as seen in this clip:

Later, they would bring in a romantic interest for Dusty: a polka dot-wearing “superfan” named Sapphire. Dusty “discovered” Sapphire when she distracted one of his opponents, allowing him to pin his opponent. After his, he invited her into the ring to join him in his post-match dance. If you feel like it, watch this short clip and tell me how you can’t love that duo?

Sapphire would then serve as Dusty’s manager for two years until his 1991 retirement. He would go on to work as a promoter and event booker for WCW and then later return to WWE in a similar capacity.

A few years ago, when my brother Rob turned 21, he decided he wanted to celebrate by he and I driving out to Arizona for Wrestlemania 26 (where we saw Michael Hickenbottom‘s last match). I hadn’t followed wrestling in probably a decade, so I thought the Shawn Michaels match would be my highlight of the trip…until Rob told me that there was a special event where Virgil Runnels, Jr. would be signing autographs and taking pictures. Wearing a pink collared shirt, he was just as charming, friendly and awesome in person as he is on screen. Looking back, it was one of the better moments of my life, where a California-born pre-med student got to spend a few minutes connecting with a Georgia-born son of a plumber, and reaffirm that The American Dream is alive and well. 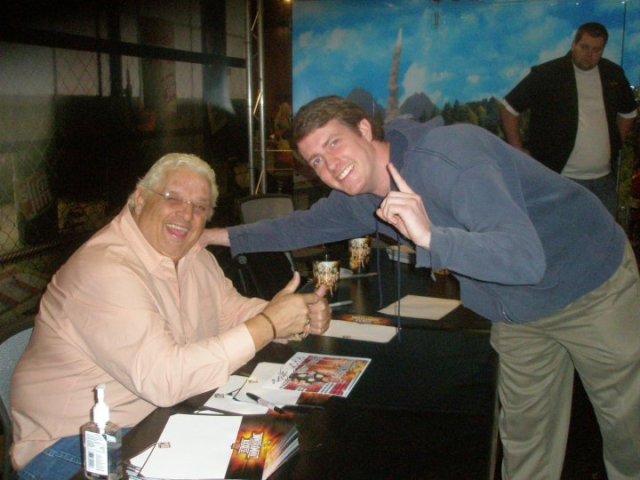 The picture on the table was signed “To Dave, Stay Funky! – Dusty Rhodes”