Many of us here at the Derri-Air Center for Advancement of Funny Names are big fans of country music. No, not that newfangled slightly twangy Shania Twain pop business. Oh no, we’re talking about good ol’-fashioned honky-tonkin’ country music as played by the masters like Willie Nelson, Merle Haggard, or Loretta Lynn. That stuff, it sure is a humdinger of a good time. (Others at Funny Names HQ prefer decidedly louder brands of music – I’ll let you guess in good time who’s in which camp). 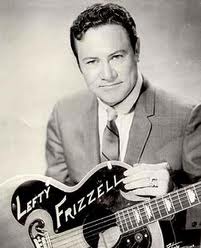 If I had an unforgettable name like Lefty Frizzell, I too would show it off as prominently as possible.

One of the great legends of old country is a fellow they used to call Lefty Frizzell. Lefty was born in Corsicana, Texas, home of former Texas governor Beauford Jester among many other funny named individuals, but he soon moved with his family to Arkansas. He picked up the guitar as a young boy and soon was making regular appearances on local radio, much like this kid.

Before too long Lefty was making his living playing at honky tonks, saving him from a life working in the oil fields like his father. He picked up the name “Lefty” at a school yard scrap, although his record label later gleefully claimed the name came from Frizzell having won a Golden Gloves boxing match. Sadly, he had not.

The good news is, Lefty soon became one of the premier country music artists in the country. At one point in 1951, he had four songs in the Country Music Top 10 at the same time – a feat that was only bettered thirteen years later by the Beatles with 5 songs in the Top 10 of the pop charts in ’64. All in all in a career spanning over three decades, Lefty had six number one country hits and has been cited as a major influence by artists such as Willie Nelson, Roy Orbison and John Fogerty. Boxing match or not, Lefty sure left a mark in the history books.

This is actually Willie Nelson, but it’s one of those pictures that just puts you on a good mood when you see it, so what the heck

He also left a mark in the house of one R. Harmon Drew, Sr., a judge in Minden, Louisiana, when Lefty smashed his car into judge Drew’s residence while speeding through the neighborhood. Apparently, Drew had always thought Lefty had a “bad attitude”, and one imagines the country star slamming his Cadillac through the front door while he was settling in to watch I Love Lucy did little to improve his image in the judge’s eyes.

In the early 70’s Frizzell moved to Bakersfield, California and became the first country artist ever to play at the Hollywood Bowl. Unfortunately a familiar musician’s fate of those days befell Lefty as well. Years of alcohol abuse took its toll as he died at the age of 47 in 1975, leaving behind a legacy of music and a great name.

Co-founder of the Funny Names Blog, Hawaiian shirt enthusiast, and holder of a funny name himself with too many vowels for any sensible person. Currently residing in San Diego, California, scouring through obscure documents on a hunt for more funny names. www.funnynamesblog.wordpress.com
View all posts by Arto →
This entry was posted in Uncategorized and tagged biography, country, funny, funny names, humor, music. Bookmark the permalink.