This week we’re turning on the way back machine for round two of funny baseball nicknames. While all of these men played many decades ago, they have all made a lasting mark on baseball history, in one way or another.

Burleigh Arland “Ol’ Stubblebeard” Grimes (1893-1985) – As if being named Burleigh Arland Grimes wasn’t enough, this Hall of Fame pitcher was saddled with the nickname Ol’ Stubblebeard for good measure. Grimes was a fitting last name for this man, who has the dubious distinction of being the last pitcher allowed to legally throw the controversial spitball (a pitch in which the baseball is covered by one or several foreign substances to create unusual, unpredictable motion). Ol’ Stubby was also known for his temperament, gaining the ire of many by once throwing a ball at the batter in the on-deck circle. However, he was also one heck of a pitcher with one hell of a name.

Will “Whoop-La” White (1854-1911) – One of my favorite baseball nicknames ever belongs to a man who holds two of baseball’s unbreakable records. Whoop-La threw an unbelievable 75 complete games during the 1879 season, amassing 680 innings pitched that year. Both are major league records which will never be broken (for perspective, a great pitcher might throw 5 complete games a year and amass perhaps 225 innings). Whoop-La was also the first man to wear eyeglasses on the field. And while he has been largely forgotten in the annals of Major League Baseball, I think there should be more hoopla for Whoop-La! 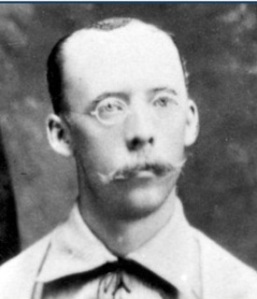 Whoop-La White – pitcher or frontiersman? They don’t make collars (or ballplayers, for that matter) like that anymore!

Charlie “Piano Legs” Hickman (1876-1934) – A well-regarded utility player and occasional pitcher, Piano Legs was so nicknamed for his apparently poor baserunning skills. But perhaps the nickname was ill-fitting for Hickman, who amassed 91 career triples to go with several inside-the-park home runs. But while his baserunning skills may have been better than he is given credit for, his defense sure wasn’t – Piano Legs set a still-standing Major League record by committing an eye-poppingly bad 90 errors during the 1900 season. Wow!

Huge San Diego Padres fan, working as an economic consultant in Pasadena, CA. Contributor to the Funny Names Blog. funnynamesblog.wordpress.com
View all posts by Rob →
This entry was posted in funny names in baseball. Bookmark the permalink.