Willard Wigan is a micro-sculptor. That means he makes sculptures that are really really tiny. It also means he has a great, alliterative funny name, which earns him a spot in the Funny Names Hall of Fame, right here on this internet web page. 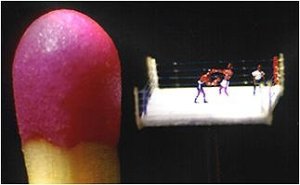 Some of Wigan’s fanciful artwork, depicting a boxing match in midair next to a giant ice cream cone.

When I said he makes really tiny sculptures, I meant really tiny. You need a microscope to see them. His materials include grains of sand and spider’s cobwebs. He told CBS News a few years ago he could make his art as small as “five microns”. For those of us who live in a reality where that isn’t particularly descriptive,that’s the size of a tip of a human hair. So yeah, this guy works with some tiny instruments.

Wigan didn’t always work small. His early work, unseen by the public, allegedly includes a life size statue of Mike Tyson. Coincidentally, or maybe not, Tyson is among the high profile collectors of his tiny statues. That random list of celebrity collectors includes Sir Elton John, Prince Charles, Simon Cowell, and yes, Mike Tyson. One gets the feeling one of these names does not belong. 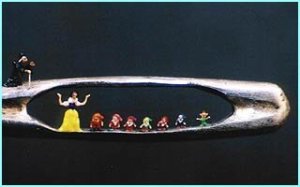 Yes, Snow White and the seven dwarfs (even smaller than usual). This guy’s got some skills

Wigan is another subject on this blog who reached greatness after a difficult start. He was dyslexic as a child and ridiculed by teachers for his inability to read (way to go educational system!). He escaped from the bullying teachers and classmates into his art, and eventually became one of Britain’s most celebrated sculptors with his unique statues that can only be seen with a microscope.

His recent work include a sculpture of Buzz Aldrin, carved into the eye of a needle in celebration of the 40th anniversary of the moon landing, and a statue of Betty Boop about 0.0002 inches tall. You can really spiff up your art collection with some of these weirder subjects without worrying about visitors thinking you’re strange since, you know, they can’t see them. You just have to worry about the housekeepers sweeping them up.

Co-founder of the Funny Names Blog, Hawaiian shirt enthusiast, and holder of a funny name himself with too many vowels for any sensible person. Currently residing in San Diego, California, scouring through obscure documents on a hunt for more funny names. www.funnynamesblog.wordpress.com
View all posts by Arto →
This entry was posted in Uncategorized and tagged art, funny, funny names, humor. Bookmark the permalink.