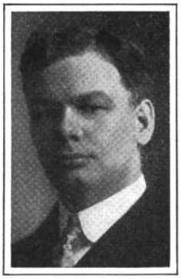 Sometimes, people do well enough in life to be remembered. Others do so well they get streets and such named in their honor. Judson C. Welliver was such a cool guy, they named a whole society after him. Who “they” are remains unclear, but they probably had something to do with speechwriting, considering that was the primary occupation of today’s hero. Mr. Welliver had a great name, and is recognized as the very first presidential speechwriter in American history.

The Great Judson was born in the wonderful town of Aledo, Illinois. It’s wonderful not just because it has a funny-named mayor, Bill Breeden (what he’s breedin’ is unclear), and because it hosts an annual Rhubarb Festival, offering “a variety of rhubarb-related activities”, whatever those may be. That’s pretty great already, but it’s not the half of it. Delightfully, the “notable people from Aledo” section on Wikipedia includes these names alongside Mr. Welliver :

My collegue Rob can tell you more about the baseball folks, being more knowledgeable than I in that category. Come to think of it, I think Suzy Bogguss might be more knowledgeable than I am when it comes to baseball. I don’t really know anything about Suzy either, but I like her because she records country music, is from Aledo, Illinois, and has confessed to have worked with people named Jim Foglesong and Pat Quigley, which we appreciate at this blog.

Suzy Bogguss having a humdinger of a good time at the Aledo Rhubarb Fest! I’m considering a trip myself next time ’round.

Where was I? What’s this article about again? Ah, Judson C. Welliver, the first presidential speechwriter. Well, to get back on topic, let’s just say Mr. Welliver definitely never wrote any asides like that in his speeches. That would just be terribly unprofessional. Oh boy, I don’t approve of that kind of shenanigans one bit.

Judson Welliver (anagram : nude liver jowls) was employed by Warren G. Harding as his personal speechwriter from 1921 to 1925, having also helped Harding along on his campaign. Before that he was a respected journalist, working for great-named papers across the land from the Fort Dodge Messenger to the Des Moines Leader. After Harding’s presidency, he quit speechwriting and took on a higher-paying position at the American Petroleum Institute, which definitely sounds like a great source of unbiased information on all things oil.

That concludes today’s lesson, kids. You have learned nothing, but don’t worry, this won’t be on the test. Now go on along and listen to some Suzy Bogguss records and chew on some of that rhubarb you have growing in the back yard there.

Co-founder of the Funny Names Blog, Hawaiian shirt enthusiast, and holder of a funny name himself with too many vowels for any sensible person. Currently residing in San Diego, California, scouring through obscure documents on a hunt for more funny names. www.funnynamesblog.wordpress.com
View all posts by Arto →
This entry was posted in Uncategorized and tagged country music, funny names, humor, rhubarb. Bookmark the permalink.