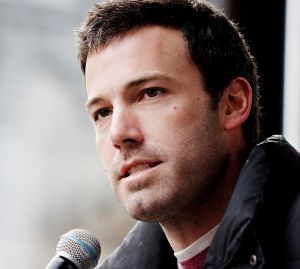 Rob or Ben Affleck? You decide…

Arto discovered this name and clearly is more qualified to write about it, but I wrote 12 med school application essays today, so I’m taking it anyway. Oh, and I have a hernia. How much does that suck!?!? Oh well, at least I’ll be watching some great boxing in Las Vegas next Saturday, so things could get worse.
Anyway, Benjamin G. Affleckbolt is not a super hero. Actually, that’s not true. He did play Daredevil in the movie Daredevil, about a blind lawyer who fights for justice. Funny, I thought blind lawyers were usually just making that up so they had an excuse to ignore obvious evidence.

The fact that I decided to use a picture of a man’s lowest moment in a post about how awesome someone is just proves that I’m not half the man Benjamin Géza Affleck-Boldt is.

He might have been the biggest movie star on the planet for a brief period around the turn of the millenium, due to his involvement in Good Will Hunting, which he followed with starring roles in Armageddon, Pearl Harbor, Sum of All Fears, and Daredevil. Then he decided to follow it up with Gigli, which was only giggle-inducing when you saw Jennifer Lopez clucking like a chicken.  The movie didn’t do so well, and – much to the, um, ABSOLUTE SURPRISE! of everyone – Lopez and Affleck broke up soon thereafter in 2004.

Affleck decided to lay low for a few years, which I would have probably done too if I starred in a $75 million film that grossed only $4 million, but don’t cry too hard for the fella. Just a year after  breaking up with Lopez, he married the lovely Jennifer Garner and has since put together a pretty impressive resume as a director – directing Gone Baby Gone (a very good thriller with a villain named “Cheese”) and starring, writing, and directing the 2010 thriller The Town, which was almost universally well-received.

In addition to his pursuits in the world of entertainment, he is also known as a well-informed advocate for political causes and a generous giver to charity.

You know, Benjamin Géza Affleck-Boldt is that kind of guy that all men are forced to “hate-respect,” he’s handsome, wealthy, talented, and has had a long and illustrious career in both entertainment and the dating scene. Perhaps he made Gigli just to show us all that he is, in fact, human. Which could be the most generous charitable gift of all.