Orland Kurtenbach and the Legend of Flin Flon, Manitoba 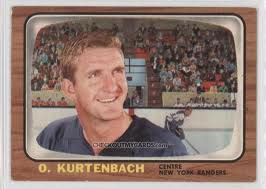 The great Orland Kurtenbach ticks all the boxes, and more.

Orland, being a Canadian, was of course a professional hockey player. Hailing from Cudworth, Saskatchewan, where he grew up on a farm, young Orland seemed destined for a hockey career from the start. He began as a defenceman, playing for the Prince Albert Mintos for two seasons, just the first of a series of hilariously named hockey teams in his career.

After a while, his attacking instincts proved him more suitable as a forward, where he was to be deployed for the rest of his playing days. During his junior career, along with the Mintos, he also appeared for the Saskatoon Quakers and the Flin Flon Bombers. At the latter he won the legendary Memorial Cup in 1957.

Before we move forward, I should probably address the Flin Flon Bombers here. Yes, Flin Flon is a real town in Canada, in that tropical paradise sometimes referred to as Manitoba. The town probably deserves its own blog post here, but I will just mention that it was named after its founding in 1927 after a science fiction novel called The Sunless City, whose main character bore the fantastic name of Josiah Flintabbatey Flonatin. Hey, if I was reading that book and happened to be founding a town immediately afterwards, I’b be tempted to flonatin it up a bit myself. 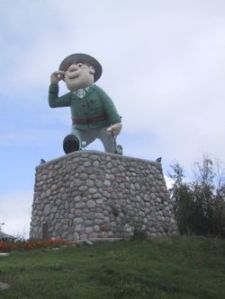 But we’ll return to that story at a later date.

Orland Kurtenbach started his professional career immediately following his triumph in Flin Flon, earning a contract with the Vancouver Canucks, then in the minor WHL league. He did well enough in his first season to earn Rookie of the Year honors as Vancouver went on to playoff success that year, managing not to incite any riots in the process.

He toiled in the minor leagues for a long time, eventually ending up with the Toronto Maple Leafs where our old friend Punch Imlach gave him a chance to be a regular player in the biggest of pro leagues, the NHL. Later he wound up back with the Canucks, who had in the meantime joined the NHL as part of its ongoing expansion. He became their captain and ended up playing a highly respectable 639 games in the NHL before his retirement.

To keep his funny name legacy going, Kurtenbach turned to coaching after his playing career, holding jobs with the Seattle Totems, Tulsa Oilers, and best of all, the Richmond Sockeyes in the minor leagues. He retired from hockey in the mid 80’s and now runs a golf range in British Columbia with his wife, enjoying his memories of Flin Flon.

Co-founder of the Funny Names Blog, Hawaiian shirt enthusiast, and holder of a funny name himself with too many vowels for any sensible person. Currently residing in San Diego, California, scouring through obscure documents on a hunt for more funny names. www.funnynamesblog.wordpress.com
View all posts by Arto →
This entry was posted in Greatest hits and tagged canada, flin flon, funny, funny names, hockey, humor, sci-fi, sports. Bookmark the permalink.

36 Responses to Orland Kurtenbach and the Legend of Flin Flon, Manitoba