Johannes Gutenberg, sporting the “Bifurcated Nostradamus” facial hair that made ladies swoon in the 1300’s.

As many of you know, Johannes Gensfleisch zur Laden zum Gutenberg is kind of a big deal. So much of a big deal, that you probably wouldn’t be reading this were it not for ol’ Jo.

Why not? Well, JGzLzG (or “jugzelzgee” as no one ever called him) was the man who invented mechanical movable type – and not just to come up with the unusual assortment of letters that comprised his name. While that may have been an early exercise in movable type, what Mr. Gutenberg is most famous for is the invention of the printing press.

This was a big deal. It made it easy to reproduce written works without relying on wood carvers or monks (seriously, Monks in those days spent a tremendous portion of their time being human Xerox machines) – and allowed the dissemination of knowledge to reach unheard-of levels. Kind of like the internet, except that in those days they only reproduced important works by smart people and didn’t have LOLcats.

This invention is widely considered the most important event of the modern period, which means “after the middle ages.” No event since serfs stopped working on fiefdoms – not the invention of the automobile, human flight, atomic bombs, computers, the internet, Viagra, professional baseball, or World War II – was as important as the printing press.

Johannes Gutenberg, sporting the “Twin Twizzlers” beard that made women swoon their way into the information age.

But don’t take my word for it. Ask A&E, or Time-Life, or a distinguished panel of U.S. Historians. All three of them named Johannes Gensfleisch zur Laden zum Gutenberg the most important person of the millenium. Not even Dick Butkus can say that. Oh, and the ever-cynical Samuel Langhorns Clemens had this to say:

“What the world is today, good and bad, it owes to Gutenberg. Everything can be traced to this source, but we are bound to bring him homage, … for the bad that his colossal invention has brought about is overshadowed a thousand times by the good with which mankind has been favored.” – Mark Twain

There isn’t enough hyperbole in the world to describe just how much of an impact Gutenberg’s work holds – it’s almost unfathomable to imagine a world without easily reproducible books, because so many things would never have been possible.

Think about it: without the printing press, you could only make a few friends groan when they heard a bad pun. Nowadays, I can write puns that make people groan worldwide. That’s an im-press-ive contribution!

Without Johannes Gutenberg, we wouldn’t have the internet or this blog – and he would never have earned the nickname “jugzelzgee.” It would be a sad world indeed. What a de-pressing thing to think about! 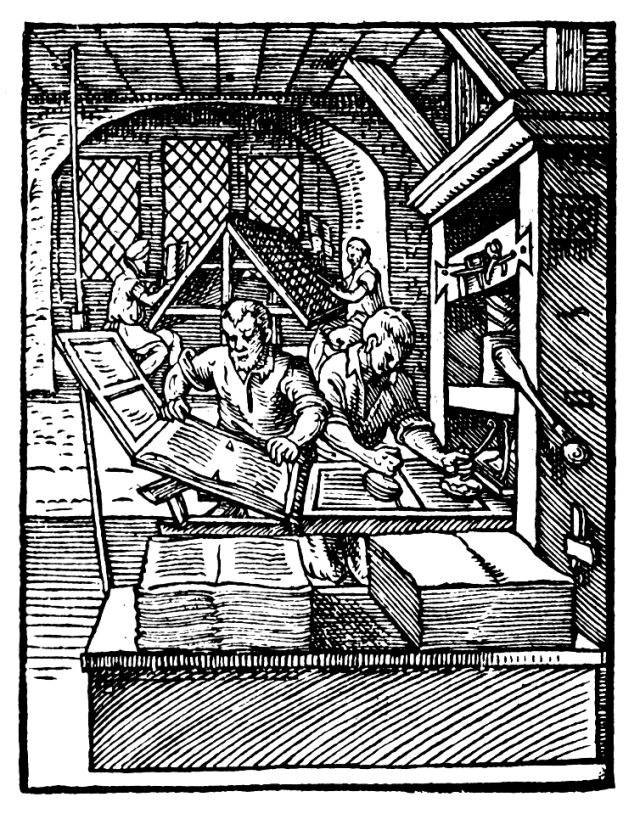 A chiseled young printer plays the maracas while his friend reads a thrilling romance novel. Those were the days!