Musicians have funny names. Just look at Lefty Frizzell, Huddie “Leadbelly” Ledbetter, or “Spooner” Oldham. It seems whatever you do, if you play an instrument you’ll eventually wind up with a funny nickname. That certainly seems to have happened to Kliph Scurlock. 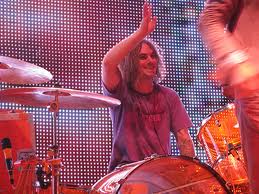 Kliph saluting his fans, who are called Kliphodells. (claim unverified).

Clifton Thomas “Kliph” Scurlock came from a musical family. His mother, Linda Louise Rokey inspired young Kliph’s love of music. And, learning just a bit about her makes me think she would’ve inspired anyone within earshot. According to Wikipedia, Linda was in the very first all-female mariachi band. The band was called Mariachi Estrella. This sounds like the kind of claim that is very difficult to substantiate, but it sounds so peculiar that there’s no way I wouldn’t repeat it.

In 6th grade, young Clifton started playing in the school band, and changed the spelling of his name to “Kliph” to distinguish himself from another kid in his grade also called Cliff. Which seems totally reasonable. Somehow, this unlikely spelling stuck and the man still goes by that very name today, making him one of just two people in the world called Kliph, the other one being an administrative assistant to the Prime Minister of New Zealand (although this claim is also difficult to verify).

At 16, Kliph got himself a drum set and started playing in a band, whose first gig, like that of any self-respecting teenage rock band, was in a strip club called the Golden Horseshoe. Trust me, that’s just how it works.

Kliph then played in a variety of bands in Kansas, including well-named groups like Contortion Horse and Panel Donor. His big break came a slightly unusual way, as he got a job as a roadie for the Flaming Lips. He stayed with them on subsequent tours as well, and his skills with the drum set eventually got him a gig as the band’s touring drummer. The band’s regular funny-named drummer, Steven Drozd, wanted to play keyboards and guitar during their live shows so Kliph jumped on that chance and took the open spot. He still plays with the band to this day.

And that’s how a guy named Kliph became rich and famous.

Co-founder of the Funny Names Blog, Hawaiian shirt enthusiast, and holder of a funny name himself with too many vowels for any sensible person. Currently residing in San Diego, California, scouring through obscure documents on a hunt for more funny names. www.funnynamesblog.wordpress.com
View all posts by Arto →
This entry was posted in Uncategorized and tagged funny, funny names, kliph, music, ogre names. Bookmark the permalink.