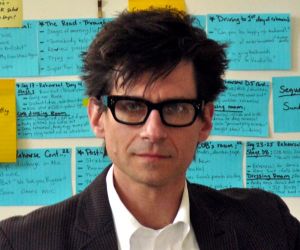 The cool stare of a Rodman.

Flender is perhaps best known for directing the underrated horror comedy Idle Hands, which is about a high school kid whose hand becomes a self-aware murderous limb that goes on a killing spree, which naturally gives the kid a bit of a bad name. He responds by placing said hand in the microwave and zapping it on “high” for 60 seconds. It’s a great piece of film, right up there with the best moments of Francis Ford Coppola’s productions.

Well, maybe not quite that good. Nothing can top Jack, after all.

Yes, the guy who directed the Godfather seriously, really, actually did make this movie.

Mr. Flender also directed the documentary Conan O’Brien Can’t Stop, which I just watched last night and enjoyed quite a bit. I especially enjoyed the end credit that said “Directed by Rodman Flender”. Yep, this is the highly selective vetting process for the Funny Names Blog you’re witnessing right here.

Young Rodman went to Harvard University at the same time as Conan O’Brien, leading to their later collaboration on Conan’s “Legally Prohibited From Being Funny on Television Tour“. With Conan’s dance moves and Rodman Flender being, well, Rodman Flender, I can easily picture them being the silliest men on campus at the hallowed university, much like Al Gore surely was some years earlier.

Flender has also performed as an actor on Broadway, appearing in the wonderful sounding Zalmen, or the Madness of God. In addition to that he has impressive acting credits on screen in classics like Beethoven’s 5th and Carnosaur 3. Flender is more often found behind the camera, and has directed hours and hours of television shows ranging from Gilmore Girls to Tales from the Crypt to Dawson’s Creek. Quite an impressive range of programs.
That’s only appropriate for a man with a name like Rodman Flender.

Co-founder of the Funny Names Blog, Hawaiian shirt enthusiast, and holder of a funny name himself with too many vowels for any sensible person. Currently residing in San Diego, California, scouring through obscure documents on a hunt for more funny names. www.funnynamesblog.wordpress.com
View all posts by Arto →
This entry was posted in Uncategorized and tagged cinema, comedy, funny names, humor, movies. Bookmark the permalink.