Head-Smashed-In Buffalo Jump is not a baseball player, ballpark, announcer, batting coach or team. Sorry loyal Wednesday readers and baseball enthusiasts, but I just had to write about this.

The HSIBJ is a buffalo jump, as its name would indicate. What is a buffalo jump, you ask? Well, it is basically a cliff which Native peoples would herd buffalo toward (and off) to hunt the animal in mass quantities. While this historic practice is no longer used, most of the buffalo jumps presumably still exist.

But this one is special. And not only because it is in southern Alberta, Canada (former home of Dave, yours truly, and everyone’s favorite Finn turned Canadian turned Brit turned American, Mr. Arto). You see, Head-Smashed-In Buffalo Jump is a UNESCO World Heritage Site, a fairly impressive distinction that recognizes the Jump’s cultural significance. 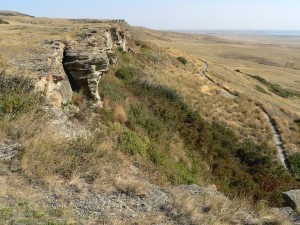 Head-Smashed-In Buffalo Jump. What more is there to say?

As to how it got its name, the distinguished, much-heralded University of Calgary sums it up pretty well: “according to legend, a young brave wanted to witness the plunge of countless buffalo as his people drove them to their deaths over the sandstone cliffs. Standing under the shelter of a ledge, like a man behind a waterfall, he watched the great beasts cascade past him. But the hunt was unusually good that day and as the bodies mounted, he became trapped between the animals and the cliff. When his people came to do the butchering, they found him with his skull crushed by the weight of the buffalo. Thus, they named the place ‘Head-Smashed-In.’”

The site is also home to a museum detailing the culture of the Blackfoot people, who used the jump thousands of years ago.
And to our dear readers: watch out for falling buffalo today. You never know what could happen. And don’t complain about the next time it “rains cats and dogs.” Imagine if it was raining buffalo.