Good morning! And welcome to my regularly scheduled Tuesday post.

That’s right; I’m not here with any holidays to celebrate, real or television-based, and  I’m not amped up on Hershey’s kisses, or pictures of certain shirtless actors. Today it’s just you, me, and a funny name.

I thought I’d take advantage of our intimate surroundings here to tell you a little something about myself. Would it surprise you to know that I’m a huge theatre geek?

Anika is a Tony award-winning Broadway performer, a record-setting movie actress, a truly intimidating television presence, and a funny names aficionado. She left California for the bright lights of Broadway after attending theatre school, and promptly landed this BoFN approved string of parts:

Although she worked steadily since arriving on the New York theatre scene, Anika’s big break didn’t come until 2004, when she took on the role of Emmie Thibodeaux in “Caroline, or Change”.

It’s hard to say just how much of her subsequent success was due to the funny-named nature of this role; after all, the book for “Caroline or Change” happens to be written by Tony Kushner, who knows a thing or two about creating award-winning parts for women. Tony’s other writing credits include the film “Lincoln” (for which Sally Field is currently nominated for an Oscar) and the play/mini-series “Angels in America” (for which Meryl Streep won basically the entire Primetime Emmy Awards). Regardless  of the factors involved, funny-named or otherwise, Anika won the Tony Award for Best Featured Actress in a Musical for her performance.

After her win, Hollywood opened up to Anika. This gave her the chance to chill with Beyonce and Jennifer Hudson on the set of “Dreamgirls”, and the chance to redefine the notion of a princess for tiara loving kids everywhere.

In 2009, Anika was the lead voice in Disney’s animated feature “The Princess and the Frog” and the very first African-American Disney Princess. Here’s my favourite quote of hers about that experience: 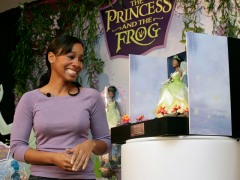 Awww! Does anyone else just feel like giving her a giant hug right now?

I remember seeing ‘Snow White and saying to my mother,’Will there ever be a Chocolate Brown?’ She said ‘Probably. Why not?’ I just never thought the first black princess would be me.

Completing her triple-threat status, Anika tackled television next, in a variety of roles. You can currently catch her in a recurring role on CBS’s “The Good Wife”, where she plays a calculating and conniving lawyer who scares the heck out of me. A princess she most emphatically is not.

Congratulations on all your accomplishments Anika! I can’t wait to see what you do next!

Would rather spend time in TV land than Corporate World. Writes at wordsbecomesuperfluous.com and wishes she was more like Ingrid Bergman.
View all posts by amb →
This entry was posted in Uncategorized and tagged Broadway, funny names, movies, musical theatre, television. Bookmark the permalink.