Well, it’s finally happened. I’ve officially hijacked the Blog of Funny Names. I’m hoping the boys will see this as an act of love and not, you know, an occasion to file a restraining order.

I had this name tucked away in case of an emergency, and when I saw that nothing was scheduled for this morning, I thought  we could use it. Given how many of us are likely suffering a showbiz hangover this morning after last night’s Oscar festivities, it seemed appropriate. Enjoy! ~amb

As a new BoFN contributor, I’m very conscious of the amount of research that I put into my posts. After all, I basically just Commented the boys to death until they asked me to come out and play – now that I’m here, the least I can do is try to meet the standards of awesome-sauce-ness that they’ve already set. But every once in a while, serendipity strikes, and a funny name will just fall into my lap. That, my friends, is how I found Whip Hubley.

I pressed “pause” to capture the name, not the shirtless-ness. Really.

It all started when I was doing some research for a post on my home blog. (I should point out here that my version of research for my home blog consists of me watching tv and hitting pause on my PVR when I see something I like). The topic of the day was Guilty Pleasure Movies, and my serendipitous moment struck during the end credits of “Top Gun”. Don’t look at me like that – I told you we were talking about guilty pleasures!

Now, all of the characters in “Top Gun” have funny nicknames: Maverick, Goose, Iceman, and the like. But only one of the cast members has a given name that surpasses that of their fictional counterpart. Imagine my delight when I found out that the pilot nicknamed Hollywood was played by an actor named Whip Hubley!

But wait. It gets better. His sister, actress Season Hubley, was briefly married in the early 1980s, and and she and her (now ex) husband had a son together. Which makes Whip the uncle of Boston Russell and the ex-brother-in-law of Kurt Vogel Russell. What did I tell you – this post practically writes itself. I love show business!

Whip is something of a journeyman actor; while he’s been working steadily since the 80s, he never stays in one place for long, and tends to, erm, whip straight from one TV set to another. Perhaps he’s just trying to live up to his name? 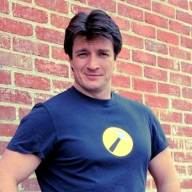 Confession: this isn’t Mike Hammer. This is Captain Hammer. Another post for another day … but in the meantime, enjoy this picture!

Whatever the reason, he’s racked up quite a long list of television credits, most of them on series that I’ve never even heard of. Which is saying something!

However, I’m happy to report that while digging through his extensive resume, I came across the notably funny-named recurring television characters Randy Jinks in “Murder, She Wrote” and Julius Llewellyn Sterling in “Mike Hammer, Private Eye”.

Would rather spend time in TV land than Corporate World. Writes at wordsbecomesuperfluous.com and wishes she was more like Ingrid Bergman.
View all posts by amb →
This entry was posted in Uncategorized and tagged academy awards, actors, funny names, humor, humour, Top Gun, tv shows, Whip Hubley. Bookmark the permalink.