Ledell Titcomb (1866-1950) had an awesome name. To add awesomeness to awesomeness, Ledell also had an amazing nickname – “Cannonball” Titcomb. Cannonball was a Major League Baseball pitcher who had a career not nearly as memorable as his name. Ledell finished his career with a 30-29 record and a 3.47 ERA over 5 seasons, bookended by stints with the awesomely named Philadelphia Quakers and Rochester Broncos.

Ledell had a memorable day on September 15, 1890, when he pitched a no-hitter in a 7-0 victory over the Syracuse Stars. He was also a member of the World Champion New York Giants of 1888. Also of note, he is reported by baseball-reference.com as being 5’6” tall, which would thus make him one of the shortest men to ever pitch in the Big Leagues.

His Giants teammate, Ed Crane, was also nicknamed “Cannonball,” and the twosome was referred to as the “Cannonball Duo.” It is posited that he got the nickname due to his propensity to throw strikeouts, but this is not certain. 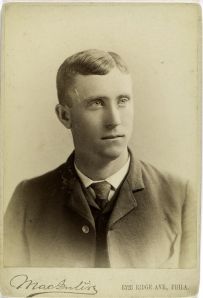 To close, here is (no, not Ogden Nash!) an awesome excerpt from the May 25, 1887 issue of Sporting Life about good ‘ol Ledell:

“Two thousand throats gave Ledell Titcomb an ovation of which he should be justly proud on Saturday when he stepped in the pitcher’s box to pitch his first game for Jersey City. And it is the verdict of all who saw the game that he is a ‘dandy’. . . Tuesday Titcomb pitched his second game, and scored his second victory . . . Titcomb struck out eight men, and would have struck out as many more had Umpire Hoover understood the nature of a ball or strike. . .” (quote courtesy of BR Bullpen)

Ah, they don’t write like that anymore. Kind of unfortunate, in my opinion.

Huge San Diego Padres fan, working as an economic consultant in Pasadena, CA. Contributor to the Funny Names Blog. funnynamesblog.wordpress.com
View all posts by Rob →
This entry was posted in funny names in baseball, Greatest hits. Bookmark the permalink.