The last time I talked about a boy on this blog, I will admit that, yes, I may have gotten perhaps just a tiny bit carried away. I can assure you that this won’t be happening today, my friends. Not because I’ve suddenly and mysteriously matured in some way (perish the thought!) but because today’s funny-named actor has one of the most marvelously mellifluous voices on television. Everyone sit back, relax, and enjoy the oh-so-smooth stylings of Mr. Chi McBride:

Have his dulcet tones drawn you in to the drama? Do you not want to keep watching this show, just to hear Chi tell the rest of the story? You should; “Golden Boy” is, at least according to this particular culture vulture, one of the best new dramas of the season. But that’s another Favourite Television Show You’ve Never Heard Of  for another time; today’s post is all about Chi. Which, by the way, is pronounced “shy” (as in, the opposite of Amber) and not “chi” (as in, tai-chi). 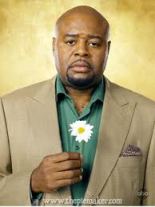 “Pushing Daisies” may have gotten cancelled, but this picture of a very big Chi with a very tiny flower is forever

I wasn’t kidding when I said his stylings were smooth: although he’s best known for his roles on long running television drama series like “House” and “The Practice”, Chi grew up singing with gospel choirs in his native Chicago, and his first success in show business came with the song “He’s the Champ”, which parodied the marriage of boxer Mike Tyson and actress Robin Givens. I’ll leave it up to Dave to make some boxing jokes in the comments, and will just say that the tune was a knock out hit. (*groan* I know. I’m sorry Dave – deceased paleontologist references I can handle; but boxing puns are way out of my weight-class). Anyway, based on the tune’s success, McBride was signed by Esquire Records and he joined the rhythm and blues band Covert.

Once he hit the ripe old age of thirty, Chi decided that it was time to make the switch from reading sheet music to reading scripts, so he headed to L.A. His distinctive look and voice quickly earned him guest spots on popular shows like “In Living Color” and “The Fresh Prince of Bel-Air” and he’s worked steadily in TV and film ever since. In fact, “steadily” might be an understatement: my showbiz sources tell me that Chi has played the same character (Steven Harper) in three different television series spanning from 1997 to 2004: “The Practice”, “Boston Public” and “Boston Legal”.

“Golden Boy” airs Tuesday nights on CBS; if you’ve already googled “funny names blog + amb” and are looking for a way to fill your Tuesday evenings, might I suggest mellowing out with Chi?