Hello there Funny Name Enthusiasts (FNEs)! Welcome to this week’s recap of Funny Names in the News (FNITN) and Collection of Awkwardly Collected Acronyms (CACA).  Hope you enjoy the show! 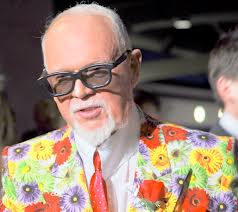 The good news is this suit will likely also end up in a museum one day. It’s kind of special.

Firstly, exciting news from Canada, land of exciting news. Our Exciting News Correspondent Amb has had her ear firmly planted on the telephone receiver of…excitement, and by way of that clumsy analogy she has come to learn of the discovery of a “boneheaded” dinosaur in Canada – and here’s the part that caught me by surprise – she’s not talking about Don Cherry.

No, this is an actual dinosaur fossil, found on the ranch of cattle farmer Roy Audet. Appropriately enough the species was named after Mr. Audet, whose ranch is located in the world’s SCUBA diving capital of Milk River, Alberta.*

This week’s most gripping political news is brought to us by Dave, the Surgeon General of Funny Name Bloggers, who tells us that a man in Maryland known for his “toilet protests” is running for the position of Lt. Governor in that lovely state. Even better, his name is Duane “Shorty” Davis. Also considering runs are Attorney General Douglas Gansler, and Rep. Dutch Ruppersberger III. We wish luck to the toilet man, but he’s up against some pretty funnily named opposition here.

Our Singing Persons Correspondent Amb has been busy watching people singing, and tells me that sorta rhyming named actress Michell Chamuel has been particularly delightful with some of her Cyndi Lauper renditions. Two

good names like that meeting can only result in perfectly adequate reality television type business, and a good deal of amusement. Go here and Amb will tell you all about it.

You may not have known this about me, readers, but I’m a huge fan of Eastern Texas poetry. You probably didn’t know this because it just happened as I read this article about Gwendolyn Zepeda, Houston’s first Poet Laureate. We can only commend the city of Houston on their fine choice.

Thank you for reading another recap of Funny Names in the News. See you next week!

*Please do not arrange a SCUBA diving trip to Milk River, Alberta based entirely on my recommendation and then write in to complain. You are stupid, live with it. But while you’re up there, do stop by at Delicia Bakery at 113 Main St. I’m told the muffins are to die for.**

**I am in no way angling for a job writing for one of those in-flight magazines here.

Co-founder of the Funny Names Blog, Hawaiian shirt enthusiast, and holder of a funny name himself with too many vowels for any sensible person. Currently residing in San Diego, California, scouring through obscure documents on a hunt for more funny names. www.funnynamesblog.wordpress.com
View all posts by Arto →
This entry was posted in Uncategorized and tagged amusing, comedy, dinosaur, funny, funny names, news, poetry, satire, tv. Bookmark the permalink.