The moment I heard the name Ludwig Binswanger is the moment I knew he would appear on these pages. Binswanger was a prominent psychiatrist in the early 20th century, bumping shoulders and comparing mustaches with people like Sigmund Freud and Carl Jung. He frequently defeated each of them in comparisons of whose name is funnier, to their considerable annoyance. 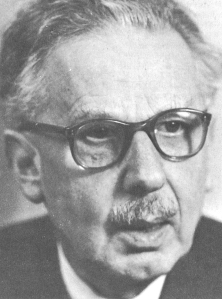 He lost the mustache comparison contests though.

Mr. Ludwig Binswanger was born in Switzerland in 1881, the year that Billy the Kid was killed, the Cincinnati Reds played their first ever game, and Kansas banned alcohol. It was generally a bad year.

But with Binswanger’s birth, the world had hope again. He was a pioneer of what is called existential psychology, a “method of therapy that operates on the belief that inner conflict within a person is due to that individual’s confrontation with the givens of existence…such as the inevitability of death…existential isolation, and finally meaninglessness.”

Since Binswanger’s time, a fine therapist by the name of Woody Allen has helped most of us deal with these issues, but  in the early 1900s it was all new, and someone in Europe with a mustache and a serious look on their face had to take care of that.

Mr. Allen boxing a kangaroo as part of his approach healing all our psychological wounds with absurdity.

This is where my expertise on psychology ends (just about where it begins), so I will not attempt to go any deeper on his beliefs or theories.

For those of you who do like words of more than two syllables, I leave you with this quote from Encyclopedia Britannica about Mr. Binswanger’s life’s work.

Diagnosing certain psychic abnormalities (e.g., elation fixation, eccentricity, and mannerism) to be the effect of the patient’s distorted self-image and his inadequate relation to the world, [Binswanger] developed a form of psychoanalysis to establish the patient’s consciousness of self as a total person, uniquely existing in and communicating with the concrete world as it is.

Sounds fancy, and I’m sure it is. All I know is, Ludwig Binswanger was a great man with a wonderful name and a mustache. That’s good enough for me.

Co-founder of the Funny Names Blog, Hawaiian shirt enthusiast, and holder of a funny name himself with too many vowels for any sensible person. Currently residing in San Diego, California, scouring through obscure documents on a hunt for more funny names. www.funnynamesblog.wordpress.com
View all posts by Arto →
This entry was posted in Uncategorized and tagged funny names, ludwig binswanger, mustache. Bookmark the permalink.