Funny Named Ballplayers on Film OR: What Happens When Amb Tries to Talk About Sports

Well good morning, sports fans! It’s Wednesday, which means that it must be time for another post about funny names in baseball.

For those of you who were looking forward to hanging out with Rob this morning, I’m sorry to say that you’re stuck with me instead. Rob is in the midst of some 14 hour days at the litigation firm, doing, erm, whatever it is he does at the litigation firm, so he asked me to step in. I’m not entirely sure why I said yes, to be honest, since I’m in the middle of a very Wordful Wednesday over on my blog – apparently the Carlson men are my kryptonite, and I can’t resist either of them. Hmm. There’s a joke in there somewhere about amb spending too long in the Fortress of Solitude, but I’ll leave it to you to tease that out in the comments.

In the meantime … what were we talking about? Right; baseball. (You guys are really missing Rob right about now, aren’t you?)

My post is, as I’m sure you’ve already figured out, going to be a little bit different from your usual Wednesday fare. Since I never talk about a real person when a fictional character will do, here are my Top Five Funny Named Ballplayers on Film:

#5: Conor O’ Neill (Keanu Reeves) in Hardball: Conor doesn’t make it on base, but he scores an RBI with this one, partly 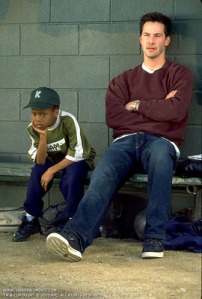 Whoa. Baseball is a trip, dude.

because I think it’s hilarious that he’s being so “unconventional” with his “Conor with one N and Neill with two Ls” and partly because, dude, it’s Keanu.

#4 Doctor Archibald “Moonlight” Graham (Burt Lancaster) in Field of Dreams: Doc Moonlight hits a single because first of all, does that sound like the name for a really great techno DJ or what?! And second of all, because that scene where he crosses the line in the cornfield to save little Karin Kinsella’s life chokes me up every. single. time.

#3 Dottie Hinson, Mae “All the Way Mae” Mordabito, Marla Hooch, and the rest of the Rockford Peaches in A League of Their Own: Full disclosure: I love this movie. I would have found a way to put it on the list regardless; lucky for me Penny Marshall likes to name her characters after slang for alcoholic beverages! Hootch?! Really?!? Marla scores a double for the ladies (and maybe pours one, too?) 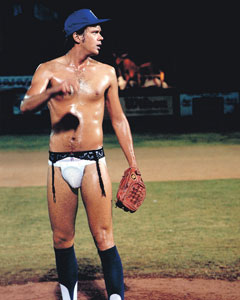 Tell me about it, dude.

mostly because it’s fun to watch him and Annie (Susan Sarandon) eyeball each other, but also because he reminds me of my wicked awesome Keanu when he says wicked awesome stuff like this: Clubhouse reporter: So how does it feel to get your first professional win? Ebby Calvin LaLoosh: It feels out there. I mean, it’s a major rush. I mean, it feels radical in kind of a tubular sort of way, but most of all, it feels out there.

#1 Crash Davis (Kevin Costner) in Bull Durham: A home run. One of my favourite characters in one of my favourite movies of all time. For a whole dugout full of reasons, but mostly because of the speech. You know the one.

Well, that’s the ballgame, folks! Did I leave out any of your favourite characters? Tell me which fictional players I missed in the comments.  I’m out of here before Rob makes me return my keys to the clubhouse!

Would rather spend time in TV land than Corporate World. Writes at wordsbecomesuperfluous.com and wishes she was more like Ingrid Bergman.
View all posts by amb →
This entry was posted in funny names in baseball, funny names in movies and tagged A League of Their Own, baseball, baseball movies, Bull Durham, Field of Dreams, humor, humour, Keanu Reeves, Kevin Costner, sports movies, Susan Sarandon, Tim Robbins. Bookmark the permalink.

30 Responses to Funny Named Ballplayers on Film OR: What Happens When Amb Tries to Talk About Sports