Lord Tunderin’! It’s Funny Names In The News 41 – All The News That’s CANCON-Compliant

Hello, eh! With this week’s FNITN, we’re gonna take a trip north of the border to good ol’ Canada!

But don’t worry if you don’t know how to speak Newfie – we’ll stick with our usual vernacular. But this week’s post is very much CanCon-compliant. “By golly, what’s that?!?” you may be asking… well let me explain. Back in the early ’70’s, in an effort to bolster Canada’s artistic community, they began requiring that Canadian radio stations play 25% Canadian content, and over the years this number has been raised to 30, 35, and in some cases, 40%. That means a lot of Rush and Neil Young on your classic rock stations, and for contemporary listeners, some funny-named fare like Hawksley Workman and The Slakadeliqs.

Now in order to enforce this requirement (and embed Canadian stereotypes for all posterity), they established the MAPL system. In order to classify as Canadian content, a recording must meet two of the following criteria:

However, when that meant that a Bryan Adams song may not get the airplay it deserved, they went ahead and revised the criteria in 1991, because Bryan Adams really is that important up there. 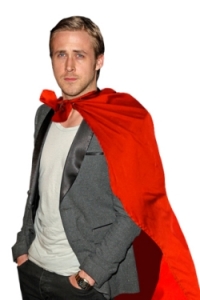 Ryan on the left

Strombo on the right!

In our first piece of CanCon-compliant news, our intrepid doe-eyed celebrity correspondent Amb informs us that cigarette smoker John Malkovich helped save a man’s life… while in Canada! An Ohioan man named Jim Walpole tripped and cut his neck on some scaffolding, and while his wife feared that he may have cut his carotid artery or jugular vein, Malkovich leaped to the rescue and helped stop the bleeding until an ambulance arrived. This led Amb’s favorite gossip site to declare Malkovich the new Ryan Gosling, which upset me, because I always wanted to be the next neuroscientist Ryan Gosling and I make better neuroscience pickup lines than John Malkovich and… I dunno… I guess I need to go out and do something heroic.

…and I will. Just you wait, Amber, just you wait! (until Monday when I make my victory speech)

In other Canadian news (that somehow Amb forgot to announce to the entire world and thus caused the show to open to subpar ratings), everyone’s favorite Canadian-Greek talk show host George Stroumboulopoulos has a new show on CNN called Strombo! Any and all Americans out there in our audience should go watch that show because Strombo is a super cool cat!

In non-CanCon compliant news… I think we’ve filled our 40% quota, Cicero Satterfield, a former Tuskegee Airman (and father of famed Ring Magazine boxing writer Lemuel Satterfield, along with thirteen other children who gave him 43 grandchildren), has passed away. Our deepest condolences to Lem and his family.

That’s quite the chorus line!

In news that is sure to give Arto a tingle, his favorite congressman, Michigan Democrat John Dingell, just became the longest-serving congressman in history. Sadly, there was no mention of the Dingell-Norwood bill, which Albert A. Gore made famous in a debate with George W. Bush back in 2000. However, Dingell did receive quite a treat when a chorus line that included cabinet member Kathleen Sebelius and House Minority leader Nancy Pelosi came to serenade him. Oh, and the declared that the Energy and Commerce Committee Hearing Room has been renamed the John D. Dingell Room. Seems like a place both Fannie and Arto should put on their funny named travel destinations.

In heartwarming news from Texas, Gael Fishingbauer Cooper brings us news that a crowd gave the adorable and talented Sebastien De La Cruz a “roaring standing ovation” when he returned to sing the national anthem during the NBA Finals. The American-born De  La Cruz made news earlier in the series when his rendition of the national anthem brought out a bizarre eruption of racist tweets, and handled it with tremendous grace. Let’s hope this time doesn’t see the same response, especially after the boy was congratulated by Spurs’ coach Gregg Popovich and Heat coach Erik Spoelstra.

Lastly, our 90’s Teen Movie Adaptations of Classic Literary Works correspondent Amb brings us the mind-blowing news that M. Night Shyamalan was the ghostwriter for the Freddie Prinze Jr. hit “She’s All That”. Given that Shyamalan is known for his twist endings, we shouldn’t be too surprised by the news of this ghost-obsessed writer being an actual ghost writer, but he stunned us once again. Shocking!

Based out of San Diego, California. Co-founder of the Blog of Funny Names. funnynamesblog.wordpress.com
View all posts by Dave →
This entry was posted in Funny Names In The News, Uncategorized and tagged entertainment, funny, funny names, George Stroumboulopoulos, humor, humour, names, ryan gosling, sports. Bookmark the permalink.

21 Responses to Lord Tunderin’! It’s Funny Names In The News 41 – All The News That’s CANCON-Compliant