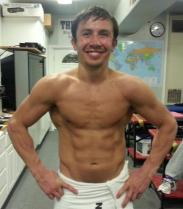 You laughing at me?!?

Gennady Gennadyevich Golovkin (Головкин Геннадий Геннадийұлы or Геннадий Геннадьевич Головкин, for our Kazakh and Cyrillic-loving readers out there) is a guy who funny name fans should hope has a good sense of humor, because if not, we’re in for a rough ride. The reason: despite his kind, youthful smile, the man can destroy you. And by you, I mean you, me, and everybody else out there.

In his last thirteen bouts, dating back to the Bush administration, this undefeated boxer has won by knockout. And he wasn’t just beating up guys like Arto and me. His vanquished foes include world champions, undefeated fighters, and guys who had never been stopped before. His last opponent, Nobuhiro Ishida, had recently handed two undefeated fighters their first career losses by 1st round KOs in consecutive fights, and had never been knocked out in a thirteen-year pro career. Golovkin dispatched him within three rounds. 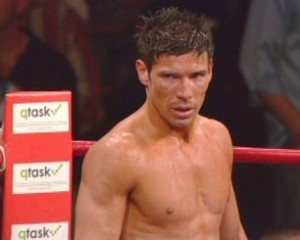 Sergio Martinez and I have recently hatched a plan to destroy Amb with our collective charm. He’s been doing the lion’s share of the work.

It’s well known that I’m a huge fan of Sergio “Maravilla” Martinez, once calling him the most important man in boxing, and travelling to Las Vegas to watch him box last fall. However, since that date, I’ve decided that Martinez – recently ranked as high as #3 in the pound-for-pound lists – will only remain the middleweight division’s kingpin until Gennady Golovkin decides otherwise. That is high praise.

One of the oldest rules in boxing is that “you can’t teach strength” – every professional boxer is an elite athlete, but only a gifted few have the ability to move people with their fists, and Gennady Gennadyevich Golovkin has that in spades. Somewhere between his Kazakh-Korean ancestry, Kazakhstani birth (in Karagandy, Karaganda Province, Kazakhstan, proving that alliteration may be a key to his success), German upbringing and worldwide amateur background lies the recipe for one of the most powerful punchers in boxing history. Golovkin has an 88% KO rate – the greatest in middleweight history and among active world champions, and the third-greatest knockout rate in the history of championship boxing.

Not only has he been undefeated as a pro, but he had a ridiculously amazing record of 345-5 as an amateur, and among his vanquished amateur foes were future world champions Andre Dirrell, Lucian Bute, Andy Lee, and Yordanis Despaigne, who put forth a good fight, but simply couldn’t contend with GGG on the awesome name scorecard category.

Although certainly nowhere near the talent level of the guys I’ve just mentioned, I have my own perfect streak – having never lost a boxing bet I have placed while in Las Vegas (I think I’m 5-0). Friends have started to turn to me for advice and it has made me a pretty popular guy on our semi-annual Nevada vacations. In two weeks, Arto, myself, and a group of friends will be making another pilgrimage to Sin City, and I plan to continue my success streak with a Gennady Golovkin KO victory over tough Irish customer Matthew Macklin. I have high hopes for this one.

Oh, and speaking of winning things, now that I’m a legit college graduate, I can put some time into defeating my delightful, witty, and alarmingly chipper CanCon-compliant co-contributor Amber (who seemed to only stipulate that I needed to last two weeks without cracking, but apparently has now decided I have to outdo her on the compliment train). My strategy: a combination of praise, Gosling/Strombo image juxtapositions, and neuroscientist Ryan Gosling-style taunts. My first offering:

Like GGG, I won’t go down without a fight.