Funny Names In The News #42: A Momentous Occasion in Three Parts

Today’s is an extremely important post. Not only has Funny Names in the News reached its 42nd edition, but it also marks the day when I gain the upper hand in Amb’s and my little contest, that has become anything but little. (The last paragraph of this post gives a background story… for more details look at Amb’s relentless assault of kind words about me in every recent post of hers.) Word on the street is she is declaring victory today. Au contraire! She will see why after our weekly roundup of all things funny named and newsy.

Part 1. In Which I Make Everything Seem Like a Normal FNITN

Yes, you will address me as SIR Chips Keswick!

So… it looks like our Finnish-American British “football” correspondent Arto has stumbled onto another excellent name on the pitch. Barclay’s Premier League hotshots – the Arsenal Gunners – have appointed Sir Chips Keswick as chairman.

And just to prove that even talented NASCAR drivers aren’t immune to mean tabloid-like coverage, Parker Kligerman (#8 in the Nationwide series) was recently filmed driving with a jack out of pit road, which happens to all of us every now and then.

Trust this man. We do.

In the “news that came to me in the form of a large vehicle merging onto the freeway” updates, I’m delighted to inform you that Francisco “Kiko” Vega is running for Gobernador just south of my neck of the woods. Now we try to be nonpartisan here on the Blog of Funny Names, but if you’ve read any Funny Names Theory lately (or simply followed our posts for a while), you know that mustaches are second only to funny names on our list of things we love.

So we hereby endorse Francisco “Kiko” Vega’s candidacy for Gobernador!

… In extortion-related news, brought to us by a correspondent who preferred to remain nameless for fear of retribution (but who was obviously Arto), we find that having an agent named Beppe Bozzo can be a pretty strong negotiating tactic sometimes.

Rest in peace, big guy! You will be missed.

You know what else can be a strong negotiating tactic? Being a mafia boss, or at least playing one on TV. So it is with great sadness that we report the death of James Gandolfini – a great guy and great actor best known for playing Tony Soprano on The Sopranos – earlier this week of a heart attack. He was 51. Sometimes the biggest hearts are the ones that leave us first.

Amb was so struck by the news that she didn’t add any additional comments (that must be a first), but Funny Film Names Correspondent Arto tells us that one of Gandolfini’s final performances was as Bobby Eggs in a TV film called Nicky Deuce. It’s no wonder he liked the guy 🙂

And in our last FNITN update this week, our “Does He Read The Missoulian All The Time? Yes, He Assures Us He Does” Correspondent Arto is proud to report that Minkie Medora of the Montana Food Bank Network had some good ideas to share at a recent roundtable. Arto also informs us that The Missoulian mentioned Critter Fuqua and the Old Crow Medicine Show will be playing Missoula on July 3rd. So there.

This past week, the Blog of Funny Names reached 100,000 page views! When two weird brothers started making a list of odd baseball names back in one of their ex-girlfriends’ houses in 2006, who could have envisioned they would later join forces with a flippant Finn (who would later be introduced to and marry said ex-girlfriend), start a blog with a post on Outerbridge Horsey, and then enlist a lovable ragtag bunch of scrappy, witty bloggers to join them on this crazy adventure.

To Amb, Arto, Fannie, Liz, Mailman, Mark, and Rob, thank you all for being a part of this wild ride. 303 posts in, and we’re only getting stronger, and it wouldn’t be possible without you.

Also, we are pleased to announce that Leslie and Arto reached their Kickstarter goal of $12,500 and will begin doing rotary printing of their Hankybooks! Woohoo!

Part 3: Where I Destroy Amb In A Fit of Acute Swooniness 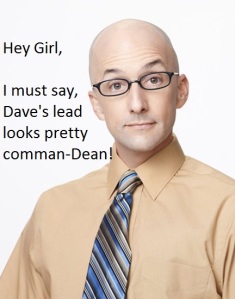 So as I mentioned earlier, Amb has been talking a big game. She made pink T-shirts.  She decided this morning to declare victory (or at least… that is until Jeff Winger and I intervened).

But as much as Amb loves and worships my brain, she seems to have underestimated my capabilities. You see, I do my best work behind the scenes, bringing people together, weaving a broad web. Amb wouldn’t be here if not for my reaching out. Neither would Liz, nor Fannie, nor Mark or Mailman or most of our favorite commenters and readers.

So while Amb was busy talking, and boasting, and declaring victory. I was working behind the scenes. Recruiting some friends, and planting seeds that have finally blossomed into full-fledged images at the bottom of posts all over WordPress. They’re everywhere, especially on Amb’s blog.

And Liz is on board. The proof is here, and in the proverbial pudding.

And after bringing Liz on board, what do I do for an encore? Well how about this? And this?

Then I decided to recruit some Friends: there’s Phoebe and Rachel and Joey and Monica and Ross and Chandler. Again, all here due to me.

I wouldn’t disagree with her.

But it goes beyond just my Friends. In fact, the whole Community is now engaged. Britta reluctantly agreed; Jeff and Troy are on board, Chang and Shirley are too. How about little Annie Edison? And Pierce? They too are believers.

And those blossoms are just the beginning. I’ve planted some seeds on Fannie’s blog, and Mark’s, and Becky’s, which shall all be blooming shortly. (Stay tuned here for the updates.)

Update 1: Fannie Cranium now seems to be a believer … twice.

Update 2: Look what has sprouted up on Mark’s blog…

So you see, I may look dormant at times, but the truth is I never sleep. The wheels are always turning, and the results come to fruition as the victories inevitably emerge. Amb, you are lovely and delightful, but for all who choose to challenge me, treat this as a cautionary tale. Dearest Amb, it’s been fun playing, and thank you for the kind words in this morning’s post. It has been wonderful.

Based out of San Diego, California. Co-founder of the Blog of Funny Names. funnynamesblog.wordpress.com
View all posts by Dave →
This entry was posted in Uncategorized and tagged entertainment, funny, funny names, humor, humour, music, names, poetry. Bookmark the permalink.

34 Responses to Funny Names In The News #42: A Momentous Occasion in Three Parts