Hi. I’m glad you’re here. Come on in and have a seat – I need to talk to you about something.

Yes, it’s Wednesday, and no, Rob’s not here today. Listen, Rob loves you all very much, but sometimes grownups have to go to these things called “jobs” where they have to put in ridiculously long hours not talking about the beauty of the Eephus pitch or their preference for “business in the front, party in the back” style haircuts. It’s sad and a little scary, I know, but it’s the way the world is.

Now, to make sure that your regular funny names routine isn’t interrupted, we’ve worked out a little visiting arrangement. Luckily for you, kiddos, I’m the least grownup person Rob knows. So, from now on, you’re going to spend every other Wednesday here with me, (where I’ll let you have ice cream for supper and get you all wound up on sugary show business gossip) and then at the end of our time together, I’ll send you back to Rob and the sensible world of baseball stats. 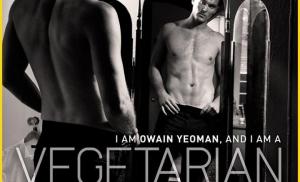 Owain is a spokesperson for PETA. In other, unrelated news, I clearly watch “The Mentalist” for the plot.

Sound good? Then grab a bowl of your favourite flavour and let’s get to today’s funny name!

We all know that I like to watch Television Shows You’ve Never Heard Of. But sometimes I like to watch shows that actually air on major networks, too. (Whatever, you guys. I contain multitudes). One of those shows is “The Mentalist”, airing on CBS. And one of the actors on that show is named Owain Yeoman.

Owain was born and raised in Chepstow, Monmouthshire, Wales and graduated from Brasenose College at Oxford. (In case you were wondering, I just said that entire sentence in my head with a Welsh accent, and it sounded awesome).

Really, I don’t think I need to include any more information in this post, do you? I’m pretty sure that  just fulfilled my funny names quota for today. But I do want us to have a good time on our first official Wednesday visit together, so I’ve got a couple of very unhealthy and very delicious gossip items to wrap things up today.

One: my showbiz sources tell me that Owain’s close friends call him “Buzz” because of his resemblance to a certain famous space invader.

Two: Owain is engaged to be married to jewelry designer Gigi Yallouz. (I swear this post is just writing itself!)

Three: my sources also tell me that Owain was once locked in a walk-in refrigerator on the job. Naked. With bunny rabbits. And Bradley Cooper. Clearly, I’m in the wrong line of work. While I’m off researching a career change, you can read about the entire escapade here.

And that’s all the time we have for today! Try not to mention how much fun we had when you see Rob next week, okay? Maybe just say nice things about his hair, instead.

Would rather spend time in TV land than Corporate World. Writes at wordsbecomesuperfluous.com and wishes she was more like Ingrid Bergman.
View all posts by amb →
This entry was posted in funny names in tv and tagged activism, animal rights, Bradley Cooper, Brasenose College, CBS, Owain Yeoman, PETA, The Mentalist, vegetarianism. Bookmark the permalink.