Boog Powell is the coolest Boog in the world. Can you name another Boog cooler? I didn’t think so. The pride of Baltimo’ (arguably, that is – Eddie Murrary, Cal Ripken Jr., Earl Weaver, Brooks Robinson, Rafael Palmeiro, Jim Palmer, Robbie Alomar, and a whole lot of other guys might beg to differ), at least on this day, is Mr. Boog!

Okay, nerd alert – non-baseball nerds go to the next paragraph – while researching for this article, I found out that Hall of Famer Jim Palmer pitched 3,948 career innings without giving up one grand slam. My gosh! That’s incredible! Insane! Holy Toledo! Wow! The closest he ever got to giving up a grandmaster occurred when he loaded the bases and Rico Carty crushed a ball over the center field wall, but Al Bumbry reeled it in for the catch! You know who gave up the most grand slams in his career? Yes, another HOFer – Nolan Ryan.

Okay, I’m calmer and done nerding out. Back to John Wesley Powell – I mean Boog. Let’s get it out of the way – why do they call him Boog? Well, according to Boog, he got the nickname from his father. “In the South they call little kids who are often getting into mischief buggers, and my dad shortened it to Boog. Hardly anybody ever calls me John. I don’t know if I‘d even turn around if someone called me that.” 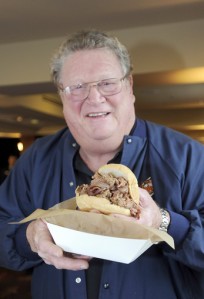 In the 70s and 80s, Boog appeared in numerous commercials for Miller Lite beer, and nowadays owns Boog’s Barbecue, which sells barbecue sandwiches and ribs at two locations in Maryland – including one at Oriole Park at Camden Yards.

I guess that means he’s a meat and taters kind of guy – get it? (Taters is slang for home runs, for those unfamiliar with baseball lingo)