No, I’m not technically supposed to be here today – what else is new?!?  Liz and I have traded days this week for a couple of reasons. One, because let’s face it, I’d eat anchovy paste if Liz asked me to, and two, because I’m trying to do what I can to throw Rob off his game and gain the home field advantage for an inning or two.

The current score in the Carlson/Lavitt match up. Pretty sure I get extra points for Robin’s outstanding hair.

The taller (so I’ve been told) of the two Carlson bloggers recently got some time off, and he decided to celebrate his hard earned freedom by spending the time making fun of “America’s Hat” (as he likes to call my homeland of Canada) and of yours truly.

Don’t get me wrong; I’m confident that all of this teasing comes from a place of deep love and of appreciation for having me as an Imaginary (Almost) Sister-in-Law … but there are only so many Justin Bieber jokes a girl can take before she has to start making retaliatory plans of her own.

Since this is me we’re dealing with, these plans naturally involve publicly discussing a passionate, all consuming (and completely fictional) love affair between Rob and a particular Canadian pop star. Allow me to introduce you to the MVP of Rob’s heart: 1980s mall touring teen sensation Ms. Robin Sparkles.

You two are going to be so happy together!

In the CBS television sitcom world of “How I Met Your Mother”, Robin Sparkles is the alter ego of Robin Charles Scherbatsky Jr (played brilliantly by Canadian actress Jacoba Francisca Maria “Cobie” Smulders).

I’m pleased to report that Robin has her very own Wikipedia page, where I was able to uncover the following fascinating biography:

Robin Sparkles is best known for her hit single “Let’s Go to the Mall” and the artistically renowned follow-up, “Sandcastles in the Sand”. She also appeared on the Canadian educational children’s show “Space Teens” with legendary entertainer Alan Thicke. The show featured two teen girls traveling through space in a spaceship shaped like a curling stone, where they solved mysteries using math and memorable songs like “Two Beavers Are Better Than One”.

I’m told this performance was what sealed the deal for Carlson, as he was instantly smitten with Robin’s obvious appreciation for Canada’s national animal. 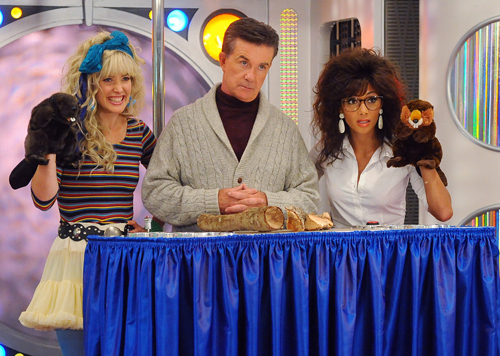 This is educational programming at its finest, folks.

The  wedding is scheduled for July 1st, 2014, and the happy couple is registered at Canadian Tire. Robin is said to be reworking “Let’s Go to the Mall” as “Let’s Go to the Ball (Game)” as a gift for Rob. Personally, I don’t see how she’ll be able to improve on the original:

Well. I think my work here is done, don’t you?

For the record, I’d just like to say that I’m a good Canadian girl (except when I’m talking to Dave) and this whole thing only got started because I was  trying to defend myself. I swear I’m not responsible for whatever happens next. That being said … Rob, honey, it’s your turn up to bat.

Would rather spend time in TV land than Corporate World. Writes at wordsbecomesuperfluous.com and wishes she was more like Ingrid Bergman.
View all posts by amb →
This entry was posted in funny names in music, funny names in tv and tagged Alan Thicke, canada, CBS, Cobie Smulders, How I Met Your Mother, humor, humour, love, marriage, Robin Sparkles. Bookmark the permalink.

37 Responses to Robin Sparkles, as played by Cobie Smulders