Funny Names in The News 51, It’s Sicnarf by a Loopstok!

Today’s Funny Names in the News is a very special one! 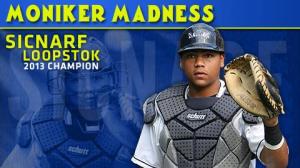 Would a Sicnarf Loopstok by any other name be as awesome? No. He would not. (Photo: MiLB.com)

“The annual Minor League Baseball Moniker Madness came to a close yesterday.  After a see-saw battle that saw the lead change multiple times in the last week,  Sicnarf Loopstok beat out Stryker Trahan and 73 other contestants and took home the coveted Wonderful Monds III prize.   As a clever correspondent for the MiLB.com site put it,  “Sicnarf edged out Stryker by a Loopstok.”   Our research department informs me that a Loopstok is an ancient Roman measure of funny-named-ness.   Our own readers were far more positive about things in Tuesday’s post, giving Sicnarf a landslide victory over second place finisher Jose Jose and dropping Stryker Trahan to third.

We have decided to bestow some consolation prizes on some of the also-rans.  Will Pinwica-Worms gets the insecticide award, primarily for his Twitter handle, Willy Worms.  Other honors include the triple double award to Forrestt Allday,  the nomenclature non-sequitur award to Raywilly Gomez and the stinkbomb award to Rougned Odor.” – Moniker Madness Mark

Dave here again. The best part is this: 30 minutes before the competition ended, Stryker Trahan was leading Sicnarf Loopstok, and then two Blog of Funny Names correspondents came in and literally changed history. The correspondents, who we’ll cryptically call Dark and Mave, placed a flurry of pro-Sicnarf votes at every possible opportunity, and five minutes before the end of Moniker Madness 2013, Sicnarf pulled ahead and coasted toward victory! He now joins notables like Rock Shoulders, Rowdy Hardy, and Seth Schwindenhammer in the pantheon of Minor League Moniker Madness greatness.

It’s great to know an everyday citizen can make a difference in the world. We couldn’t be happier for Sicnarf!

As for Stryker, he joins legendary honorable mentions like Caleb Bushyhead and Tuffy Gosewisch who narrowly missed taking the title.

Just because it’s that kind of week, I’ll leave it to Mark to close out today’s post, and I might as well give him authorship of the post too since he wrote more than half of it. Take it away, Mark! 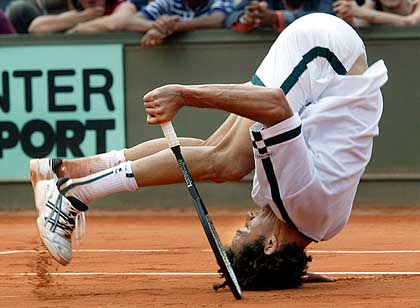 Funny names in tennis have us head over heels!

“In the somewhat funny-name challenged tennis world, the US Open moves deep into its second week and looks forward, on the men’s side, to the matchups of Jarkko Nieminen vs. Joao Sousa and Jack Sock vs. Janko Tipsarevic.  Also, long-shot Mikhail Kushkushkin advanced with his awesome name into round three.  On the women’s side many funny-named favorites were bounced out in the first round, including Kristen Flipkens, Mandy Minella, Kiki Bertens and Timea Babos.  Pretty much all that is left are a bunch of Slavic names that look like they might be funny if we could pronounce them, but we can’t, so we won’t try.” – Mark

Have a wonderful Friday everyone, and thanks for joining us for another fun-filled edition of Funny Names in the News! – Dave

"The best way to predict the future is to invent it."-Alan Kay; Let's invent a better future, together.
View all posts by Mark Sackler →
This entry was posted in funny names in baseball and tagged baseball, funny, funny names, humor, humour, moniker madness, tennis, US Open. Bookmark the permalink.

10 Responses to Funny Names in The News 51, It’s Sicnarf by a Loopstok!