Happy Monday, everybody! Today we are ready to induct a living legend into the Funny Names Hall of Fame. Which is totally a thing. And totally exists. In fact, the FNHOF is actually housed inside a building somewhere. We just haven’t figured out where yet.

It’s a well-known fact that we here at Funny Names HQ appreciate and cherish all of our inductees, but sometimes there’s a person that really pushes the envelope, and darn tootin’ if today’s subject ain’t one of them! 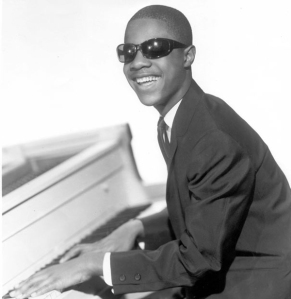 Apparently some 13-year-olds don’t have an awkward phase… Lucky ducks!

* Until I have reason to do otherwise, I’m calling Clif Bars my children… they’re all so delicious!

But our list of accomplished musicians with funny names may have an even richer history. BoFN historians may recall that Taffy Nivert was my first post ever on this blog (and for several months it was responsible for half of our incoming traffic), and we’ve covered quite a few others: Danbert Nobacon, Dolores O’Riordan, Toots Thielemans, Ethel Merman, Green Gartside and more recently Don Van Vliet aka famous Mascara Snake raconteur Captain Beefheart, just to name a few.

But today’s inductee may be the most accomplished musician profiled yet. Stevland Hardaway Judkins is better known as Stevie Wonder, and was born among a concordance of funny names – including those of his parents Calvin Judkins and Lula Mae Hardaway and his birth town of Saginaw, Michigan (not quite as funny as my favorite Michigan town Ypsilanti, but close).

And if being surrounded by names like that wasn’t enough, the guy is just ridiculously accomplished and makes me wonder what the heck I’ve been doing with my life.

Born six weeks premature, he had retinopathy of prematurity, meaning that an underdeveloped circulatory structure in his eyes caused his retinas to detach slightly after birth, and lifelong blindness.

Now some people would probably use natal blindness as a justification for striving for less in life. Stevland Hardaway Judkins instead became Stevie Wonder, releasing an album at age 12 and becoming the youngest person to reach #1 on the Billboard Charts with “Fingertips (Pt. 2)”, at AGE THIRTEEN!!!?!!!

The next time somebody complains about having a tough lot in life, just remember that a twelve-year-old blind kid sang and played three instruments (with a young Marvin Gaye accompanying on the drums), landing a #1 hit a year later.

So that’s a pretty awesome accomplishment. A #1 hit at that awkward age when most boys are just trying to work up the courage to, I dunno… talk to a girl(!). That’s a pretty epic win right there. Might as well call it a career, right?

Instead, Stevie Wonder went on to write and perform three more Top 3 hits, including “Signed, Sealed, Delivered, I’m Yours” and then let his Motown contract expire on his 21st birthday.

Why? He wanted full creative control of his music. Now he’s not the first person to want that, but his approach was pretty awesome.

Stevie Wonder went out and wrote two whole albums, which he used as bargaining chips in his negotiations with Motown.

When asked about his only regret, Stevie replied: “I’m just bummed I don’t get to see how cool I look” (Citation needed)

Oh, and I guess I should mention that he was also married by that point, to a lovely lady and musician named Syreeta Wright. Their marriage ended amicably in divorce two years later. In 2001, he remarried, this time to fashion designer Kai Millard Morris. Stevie recently filed for divorce, perhaps because he realized that nobody can keep up with Stevie Wonder.

Case in point: he has recorded more than thirty Billboard Top Ten hits (including ten number 1 hits), and his 22 Grammys are the most of any solo artist. Oh, and throw in a Lifetime Achievement Grammy too. And an Academy Award (for best song). And induction into both the Rock ‘n Roll and Songwriter’s Halls of Fame. (Not to mention the Funny Names Hall of Fame).

I think I might have to pull a Becky and just say “Oh ruddy heck! How accomplished can one guy be?”

The answer: if it’s a guy born with the name Stevland Hardaway Judkins, as accomplished as he wants!

Including this well-intentioned take on an M.C. Escher tribute, involving an infinite loop of reflecting sunglasses.

Based out of San Diego, California. Co-founder of the Blog of Funny Names. funnynamesblog.wordpress.com
View all posts by Dave →
This entry was posted in Uncategorized and tagged entertainment, humor, humour, music, stevie wonder. Bookmark the permalink.