Cutting dish service (the TV variety, folks, not plates and such) was a tough call for our family, but saving a huge chunk of change pushed us over the top and we called it quits with the cable guy. What saddened me most was losing the Cooking Channel. While never a Food Network fan, I adored CC and couldn’t get enough. (More on that love affair over at food for fun.)

It was the hosts that hooked me and a best of the best—in my humble opinion—is Maurice Alberto “Mo” Rocca. Mo reeled me in with his Food(ography), a one-hour show where he delved into a single food topic—cheese, beer, ice cream, etc. His sarcastic, dry wit and goofball-nerd charisma made for entertaining viewing and he never failed to crack me up.

More recently, he created and hosts My Grandmother’s Ravioli; Rocca has also been an Iron Chef America judge.

But Mo’s presence in the food world is but an add-on to an already successful career as a political and journalistic funny guy. He’s hilarious, for sure, but this man has some serious smarts to back it up.

Rocca grew up in Washington D.C. and attended Georgetown Prep as a wee lad. He graduated Harvard with a B.A. in Literature in 1991. While there, he was president of the school’s Hasty Pudding Theatricals and performed and co-authored burlesque productions.

His acting career kicked off with the Southeast Asia tour of Grease (1993). Rocca went on to write and produce in television, winning an Emmy and Peabody Award for his children’s series, Wishbone. He also scored a funny-name title with The Wubblous World of Dr. Seuss on Nickelodeon. Another Emmy came his way in 2011 as writer for the 54th annual Tony Awards.

If you know Mo, you would recognize his voice in VH-1’s I Love the ‘70s and I Love the ‘80s classics, where he put his penchant for (good-natured) snark to fine use.

He was correspondent for The Daily Show with Jon Stewart (1998-2003), including campaign coverage for Indecision 2000 and regular feature, “That’s Quite Interesting.” In 2004, Rocca served as floor correspondent for Larry King Live at both major party political conventions. As well, he was regular correspondent for NBC’s The Tonight Show (2004-2008) and covered the 2008 election for NBC. Fast-forward to now and Rocca is reporting correspondent to CBS Sunday Morning with Charles Osgood. In 2012 he became a regular contributor to the new CBS This Morning.

But wait, there’s more: Rocca appeared on Broadway as Douglas Panch in The Twenty-Fifth Annual Putnam County Spelling Bee and on the silver screen as E! reporter in Bewitched (2005). Another feather in his cap: Rocca penned his satirical novel, All the Presidents’ Pets: The Story of One Reporter who Refused to Roll Over, in 2004.

I’m admittedly partial to Rocca’s food show appearances, but knowing there’s so much more behind the man makes him a bit of a superhero to me. 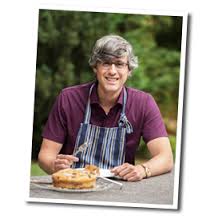