Fond du Lac, Wisconsin, is one of the country’s greatest three named cities. Nestled at the bottom of Lake Winnebago, the city of 43,021 is a great place to make a (motor) home. (Hah! A Winnebago pun – Jack Rebney would be proud) If you don’t know who Jack Rebney is, look him up on YouTube (if you have a brave spirit and the ability to handle foul-mouthed RV salesmen. Don’t say I didn’t warn you!)

Anyway, back on track. Fond du Lac is indeed a good city for families, as it anchors the MSA (metropolitan statistical area) that was named the safest metropolitan area in the US in the 2006 edition of City Crime Rankings by Quinto Press. This safety may be in part due to the fact that our second heroic hometowner (more on him and his awesomeness at the end of this post) recently retired from his job as a prison guard at the local pen. It’s also much closer to the lovely Amber Lavitt than San Diego is. (We love you, Amb!)

But we’re here for the funnies, not the love. Anyway, Fond due Lac is home to some great people, including Norbert “Nub” Kleinke, who was a pitcher for the St. Louis Cardinals in the 1930s. But I have two particular heroes in mind for today’s post.

The first is a man you all know and love – King Camp Gillette. Gillette, popularly known as the inventor of the safety razor, was actually more of an innovator than an inventor, as several models of safety razor were already in existence before King’s design. His major innovation was creating thin, cheap, disposable razor blades.
Born in Fond du Lac in 1855, King’s roots in the US go all the way back to 1630, when his ancestors came from England to Massachusetts. But more importantly, King Camp had a sharp mind and a keen business sense, and grew Gillette into an extremely successful business. The brand, of course, still continues to this day. Fun fact – in 1918, when the U.S. entered World War I, the company provided all U.S. soldiers with razors paid for by the government. 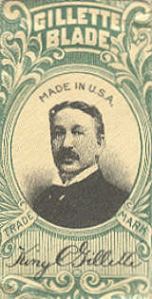 The King on his famous product.

Interestingly, Gillette was a Utopian Socialist and author. One of his books, The Human Drift, advocated that all industry should be taken over by a single publicly-owned corporation, and that everyone in the U.S. should live in a huge city called Metropolis, which would be powered by Niagara Falls. Who knew!

Our second hero is Mr. Don Gorske, who has a special place in my heart due to my own personal love of Big Mac sandwiches. Don Gorske, however, is in a whole ‘nother world when it comes to Big Macs. You see, Gorske (pronounced “Gore-skee”) is known for having eaten over 26,000 of the tasty little sandwiches in his 59 years on this here earth. The Fond du Lac-born “Big Mac enthusiast” was featured in the 2004 documentary Super Size Me.

After getting his first car in 1972, Gorske made a beeline for the local McDonald’s, where he purchased and ate three Big Macs at lunch. He then returned twice more that day and ate another six, starting off his legendary story by eating nine of the tasty suckers that day. In the following month, he claims to have eaten 265 Big Macs.
Gorske met and proposed to his wife at a McDonald’s in 1973. The two have been married ever since. Since he ate his first Big Mac, Gorske has only had to suffer through eight Macless days. One of these was the day his mother died, and he refrained from eating the sandwich to respect her request.

Gorske no longer eats nine Big Macs a day. In 2003, he ate 741 Big Macs, an average of 2.03. Surprisingly, he seems to be in pretty good shape, as he is about 6’2” and weighs 185 pounds. The reason? He eats very little other than his Big Macs, and he rarely eats the fries. Who said stuffing your face with Big Macs is a bad idea?!

Don Gorske also has one of the greatest haircuts known to man. 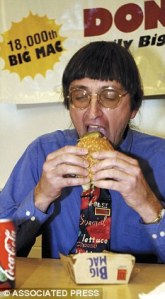 The Mac Daddy eating his 18,000th. Check out his fit-for-the-occasion tie!

16 Responses to The Heroes of Fond Du Lac, Wisconsin