Alright, so I admit this isn’t the funniest name ever profiled on this blog, and perhaps it’s only borderline funny (then again, I’ve heard it so many times I may be misjudging its humor), but it’s easily one of my favorite people I’ve profiled, and that has to count for something.

On Saturday, Bernard Humphrey Hopkins, Jr of Hockessin, Delaware defended his light heavyweight world title against Karo Murat, who entered the fight with a record of 25 wins, 1 loss. Defending a world title is a pretty impressive feat – and one I’ll never come close to achieving in my life – but what makes Hopkins’ win particularly noteworthy is this:

Bernard Hopkins is 3 months shy of his 49th birthday.

With the win, he became easily the oldest fighter ever to retain a world title. He also broke the record for oldest fighter to win a world title fight, which was held by the Bernard Hopkins who beat Tavoris Karod Cloud back in March. That win broke the record that was held by… you guessed it, Bernard Hopkins, when he defeated Jean Pascal in 2011. To find an old title winner not named Hopkins, you have to go back to George Foreman, who won the heavyweight title from Michael Moorer in 1994 at the spry age of 45.

Judging by his ring entrance attire, I’m inclined to agree.

In last night’s post-fight interview, Hopkins was asked how he still does it.  His answer: “I’m a freakin’ alien!”

That’s only partly true. Hopkins is also the most cagey veteran the sport has ever seen, even writing a monthly column for Ring Magazine that other fighters and boxing announcers read to learn more about the sport. He lives a monastic lifestyle, adhering to a strict raw food diet, and eschewing alcohol and any other non-food substances.

And he’s an alien.

When writing about B-Hop, journalists love to mention stuff like the fact that Karo Murat (who at 30 is no spring chicken by boxing standards) was 5 years old when Hopkins started his pro career. Incredible discipline has kept him at the sport’s apex. 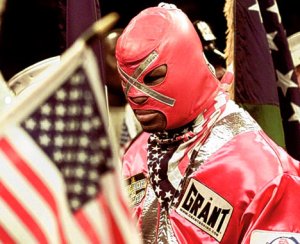 That discipline hasn’t always been there, though. Growing up as a kid on the tough streets of Philadelphia, PA (perhaps the world’s best boxing city: home to the fictional Rocky Balboa, and many very real legends like Smokin’ Joe Frazier and Meldrick Taylor), Hopkins landed in a world of trouble at a young age. At 13, he was mugging people and had been stabbed three times. At 17, he was convicted of 9 felonies and sentenced to 18 years in prison, where he saw an inmate stabbed in an argument about a pack of cigarettes.

However, there he also discovered his passion for boxing, and was released only 5 years later for good behavior. He then lost his professional debut (normally the death knell for a young prospect) and didn’t fight for 18 months, but returned as a middleweight and won his next 22 bouts over a 3-year span. He lost his first world title shot in 1993 to Roy Jones Jr., then had an unfortunate draw in his next. But once finally he won the belt in 1995, he held on to it, making 20 consecutive title defenses (including wins over luminaries like Oscar De La Hoya, Glencoffe Johnson, and William Joppy) in one of the greatest middleweight reigns in history. When he finally lost the belt to Jermain Taylor, and then lost a rematch five months later, observers wrote him off as a has-been. Eight years later, Hopkins is still swingin’ and Taylor is nowhere to be seen.

Even in his prime, Hopkins wasn’t a hugely popular fighter. He was cautious, intelligent, crafty, and didn’t take unnecessary risks – a “thinking man’s fighter” in a sport where big crowds follow the reckless knockout punchers. Only now, as each passing fight is another chance to witness boxing history, has he begun to draw the huge crowds he deserves.

Some day, possibly in the near future, Hopkins’ age will catch up with him. But until then, it’s a privilege to watch a master work his craft, and if he wants to tell us he’s an alien, who are we to disagree?

Based out of San Diego, California. Co-founder of the Blog of Funny Names. funnynamesblog.wordpress.com
View all posts by Dave →
This entry was posted in Uncategorized and tagged boxing, funny, funny names, humor, humour, names, sports. Bookmark the permalink.

21 Responses to Bernard Humphrey Hopkins Jr., aka The Alien