For other contributors here, funny name blogging is like life itself, a bounteous gift. These large-minded souls delight in discovering funny names, and cast their newfound treasures hither and thither to beloved readers with joyful abandon, as if they were so many fragrant blossoms drawn from an infinite well of fragrant blossoms.

But for a contributor like me, funny name blogging is a brutal, Hobbesian struggle. Funny names are scarce and elusive. Once surrendered to readers, they are gone forever. Most distressing of all, others are on the look out for these prized commodities, and may find them first! (Who knows if they haven’t already and just aren’t letting on?) In this savage world, a funny name is indeed like a blossom, but one standing solitary in a bleak, arid landscape. Stumbling upon such a treasure in the course of furtive funny name foraging, one first utters a startled grunt, and glares at the blossom with fierce covetousness. Then, one looks about with panicked apprehension for the possible approach of other foragers. Before long, one has scraped one’s fingers raw moving rocks to build an encircling wall–for concealment, for a territorial marker, for a defensive perimeter. Then one guards the treasure day and night until the time that one can reveal it to the world–reluctantly, grudgingly–and capture another fleeting moment of BoFN glory.

Oh, that blossom is not just an analogy, my friends! Imagine one such as myself thumbing through the jazz racks at a CD store and coming across . . . Blossom Dearie. 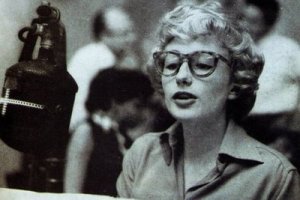 That’s probably not what she meant when she sang “Someone to Watch Over Me”.

You may easily imagine how I returned home to scour the BoFN index with pathetic anxiety, the snort of satisfaction when I confirmed that my preeeeeeeciousssss Margarethe Blossom Dearie was yet unclaimed. But what if some cunning BoFNite should discover her before my appointed post? I could hardly screech and warn interlopers off without revealing the very thing I guarded! And so, with such tortured thoughts the sleepless nights passed, until this day finally arrived. The day I can unveil my prize!

As if the name weren’t enough, my Blossom startles all the more for being an unusually good singer–and I’m not usually an enthusiast of vocal jazz. How could I not have heard of her all these years? She has an airy, playful, elfen voice with a trace of a whisper, not to mention a graceful touch on piano. (Yes, that’s her on piano, too!) She seems to prefer intricate bebop standards with complex lyrics, especially ballads. She executes phrases with impeccable subtlety, and truly interprets the songs, with feeling and wit. The wit is well represented in this spry rendition of “Hip”, a satirical poke at hipsters of yore (1966):

(Though I’m compelled to point out that Tower of Power also treated this theme.)

Blossom left us in 2009 after a long illness. RIP, dearie.

As for me, I’m off for more grim foraging.

Parasitizing YouTube and guest posting on BoFN for more than a decade.
View all posts by wdydfae →
This entry was posted in funny names in music and tagged music, musicians, women. Bookmark the permalink.