Ranger: Well, grab your baskets and let’s get goin’! 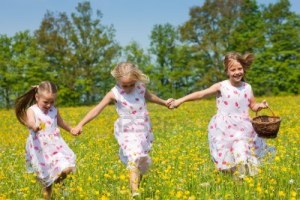 Bobby: Name Ranger, all the funny names are gone!!!

Ranger: Uh-ohhh. Dangnurbit, it looks like Wasteful Wendy’s been through, taking all the Funny Names and not leaving any for us! I guess we’re just gonna have to try again next time, kids.

Ranger: Now, hold on! Isn’t this a perfect opportunity to remember about Funny Name Waste?

Ranger: When yer out huntin’ funny names, how many should yuh get?

Ranger: Darn tootin’! And why is that?

Billy: Because you can only use them once.

Betty: And you have to leave enough for other people.

DON’T BE A WASTEFUL WENDY!

Ranger: Well, I’ll be horse’s uncle! It looks like Wasteful Wendy didn’t get everything after all. Whatcha got there, Betty?

Ranger: Well, that’s just a humdinger of a Funny Name! And wouldn’t you know it? My Supermagically Fabulous Funny Name Field Guide has a page all about her! Dja like to hear what it says?

Ranger: C.W. Perky was a scientist who used something that was brand new back then: puttin’ images up on a screen, or what we call movies! She did a bunch of experiments that have

a classic, even mythic, status in the literature on imagery. Perky asked her subjects to fixate a point on a screen in front of them and to visualize various objects there, such as a tomato, a book, a leaf, a banana, an orange, or a lemon. As the subjects did this, and unbeknownst to them, a faint patch of color, of an appropriate size and shape, and just above the normal threshold of visibility, was back projected . . . onto the screen. [N]one of Perky’s subjects . . . ever realized that they were experiencing real percepts; they took what they “saw” on the screen to be entirely the products of their imagination. In fact, however, the projections did influence their experiences: some subjects expressed surprise at finding themselves imagining a banana “upright” rather than the horizontally oriented one they had been trying for . . . On the other hand, purely imaginary details were also reported: One subject could “see” the veins of the leaf . . .

Billy: Hey Ranger, that sounds like the Stroop Effect!

Ranger: It sure does! And you know, it is like the Stroop Effect, because it teaches us oodles of important stuff about our brains. But yuh know, it’s even neater, ’cause it shows us just how golshdurn wonderful our imagination is! Well, did you all have a good time Funny Name Huntin’ today?

Ranger: Then, let’s head on back home!

This dramatization has been brought to you by the Council for Humorous Name Conservation (CHuNC).

Like Loading...
This entry was posted in funny names in science and tagged funny names, science, women. Bookmark the permalink.