can I pour you a noggin?

Here at Blog of Funny Names, we’re feeling festive and look forward to the delicious holiday season rushing toward us. In that spirit, I’ll pour you a glass of eggnog and invite you to sit back and read on as we explore the origins of this milk-based alcoholic punch.

What we know of as eggnog is a spin on various milk and wine punches concocted long ago in the Old World. Once on American soil, the punch’s wine was replaced by rum. And because rum was commonly called “grog,” the word “eggnog” is likely a shrinking of the name “egg-and-grog.” Though others claim that the “nog” in eggnog comes from the word “noggin”—a small, wooden, carved mug used in taverns. The truth might be a blend of the two: Perhaps eggnog was originally known as “egg and grog in a noggin.” Can totally see why it was shortened to “eggnog.”

I see puzzled looks among you readers. Are you thinking that while “eggnog” is indeed a funny word, this here is not the Blog of Funny Words. (Though BoFW could be the BoFN spin-off we’ve all been waiting for. Dave?) We’re at Blog of Funny Names, you’re thinking, so where’s the funny name? Well, I’ll tell you. He’s right here: meet Pierce Egan.

do you suppose he had the ladies of the early 1800s swooning?

Mr. Egan was an author circa 1820. To promote his not so succinctly titled book, Life of London: or Days and Nights of Jerry Hawthorne and His Elegant Friend Corinthina Tom, he cleverly crafted a twist on eggnog by adding brandy to the basic recipe of milk, rum, eggs, and sugar. The extra brandy fortified it considerably, making the Tom & Jerry even more popular than its predecessor.

serve your Tom & Jerry in style

While my funny-names quotient has maxed out (sorry!), it’s worth noting that George Washington, first president of the United States, was quite a fan of this potent milk punch and created his own recipe that included rye whiskey, rum, and sherry.

My favorite eggnog tale crosses this classic holiday beverage with Dave’s favorite Russian band. The Eggnog Riot, also known as the Grog Mutiny, happened at the United States Military Academy in West Point, New York in 1826. As with many riots, it was caused by a drunken Christmas Day party. Two days before said party, much whiskey was smuggled into the academy to make eggnog for party guests. The Eggnog Riot—of course named for that whiskey delivery and the subsequent eggnog making—involved more than one-third of the cadets by the time it finally played out on Christmas morning. An investigation by Academy officials implicated 70 cadets, court-martialing 20 of them along with one enlisted soldier. Now that was a holiday party to remember. 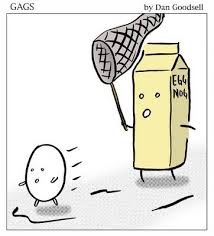 does it tie in? not really. but how cute is this?

Here’s hoping your holiday parties do not end in a similar fashion and that you are able to raise a glass of Pierce Egan’s brandy-spiked eggnog (though even the virgin version will do) and virtually clink mugs with your fellow readers here and elsewhere. A here-come-the-holidays cheers to all!