Happy Monday all! It’s one of those cool Mondays that’s also a Friday because there’s no work the next two days. Whoo! That’s the stuff every Monday should be made of. The whoo-stuff.

Today, we’re going to talk football. And by football, I mean soccer. And by soccer, I mean the sport officially known as association football, founded by The Football Association in 1863, in England, Europe, Planet Earth, Milky Way, Space.

But let’s not float too far into the far reaches of nothingness surrounding us. Instead, let’s zero in a little closer to our topic of association football.

No, not that close, let’s pull back a little. There. 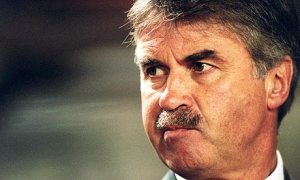 This is Guus Hiddink, and the marvelous facial hair he used to wear.

Yeeees….mustaches. I mean, the topic of this post is not mustaches, it’s Guus Hiddink!

Hey, it’s late in the year, so I’m having to work extra hard to win the prize for Most Labored Introduction to a Blog Post All Year Award. It’s a coveted prize, and I covet it.

So who’s this goose guy I’m talking about? Why, it’s Dutch association football coach Guus Hiddink! Affectionately known (by me) by various goose- related puns, Mr. Hiddink is one of the more accomplished managers in the modern game. A manager in association football is kind of a combination of roles found in American sports – a head coach/general manager/guy who says where all the water bottles should go and which way the labels need to be facing. It’s a lot of work.

Among his accomplishments, he took Dutch club PSV Eindhoven to European Cup success, which is like a pretty big deal, as they had never won that particular trophy before. He also coached several national teams to great success, taking minnows South Korea to the semi-finals of the World Cup in 2002, then reaching similar success with Russia in the European Championship 2008. He also led Australia out of the Group Stage of the 2008 World Cup only to lose in controversial circumstances to Italy in the next round. So it goes.

Most recently, he coached the catchily named Anzhi Makhachkala team in the Russian Premier League, cementing his reputation as someone willing to work pretty much anywhere for a large paycheck, and then doing a really good job. The Guus that Lays Golden Egg-Shaped Results if Paid lots of Gold. Or something. That doesn’t really work, does it? Unless the egg-shaped result is the zero of how many goals the opposition teams score. Still a bit dodgy. I’m just going to leave that in.

Next year, Hiddink looks likely to take charge of his Netherlands national team, hoping for great success with the country of his birth to follow that of the completely random nations he has already led to winning results. We wish him luck, and also hope that he brings back that terrific guustache.

Co-founder of the Funny Names Blog, Hawaiian shirt enthusiast, and holder of a funny name himself with too many vowels for any sensible person. Currently residing in San Diego, California, scouring through obscure documents on a hunt for more funny names. www.funnynamesblog.wordpress.com
View all posts by Arto →
This entry was posted in Uncategorized and tagged assocation football, funny name, guus hiddink, humor, mustache. Bookmark the permalink.

12 Responses to Guus Hiddink and His Million Dollar Mustache