And now for something completely different. Here is a special report filed by our European Field Agent Portnoy Macademia. Enjoy.

In a nondescript office building in central Lausanne, Switzerland, there is a global registry of unusual names. A man named Herland Howitzer is the curator, sole customer service representative and by unfortunate necessity, janitor. He is essentially the registry embodied, the only employee aside from a nice old woman from Missouri by the name of Janet who has the job of sitting at a desk, holding open a very large book and smiling nicely to you when you ask about this or that name, before ringing a small bell that brings Herland over to actually talk to you.

The reasons behind the Registry’s founding remain shrouded in mystery. Herland has worked here “more than several decades”, he tells me, and so did the curator/janitor before him. He has a tendency to speak in vague terms, telling me the Registry building was built “before the most recent modern times, but not too long before that”, and that the founder was a man who was “not necessarily German, but was almost certainly blonde.”

Indeed, coming to Mr. Howitzer for information about the Registry can feel like a fool’s errand. Regardless, or perhaps for that precise reason, I kept on with my inquiries, and managed to extract some actual facts not obscured by his Teutonic vagueness. The Registry contains some 100,000 names from across time. The names are not submitted by their owners, most of whom have never even heard of the Big Book, as it is sometimes called in this building. Upstairs of the Registry office is a small bank which specializes in local pharmacies, next to that is a one-room watch repair shop, and in the top floor there is the regional headquarters of a major hole punch manufacturer (“The fastest way from a to b is through a hole!” says a jolly poster at the entrance). 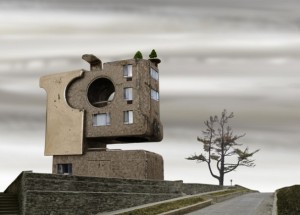 On closer inspection the names in the book do appear to be real. I checked out a few of the ones randomly found within the Big Book, and managed to track down Professor Ellsworth Portley of Oxford, England, a professor of Semantics there. He was not familiar with the Registry but was suitably intrigued to agree to visit with me there when in Lausanne for a conference on the “liquid nature of English morphemes”.

Mr. Howitzer enjoys keeping a sort of mystical air about the entry of the names. It’s not quite clear how he researches every person around the world, or what qualifies as an unusual name. For instance, a common Indian name of Purinder might sound funny to you, but it is in fact much like the name “Bob” to us, he explained to me on an afternoon tea and crackers break. Therefore you will not find people with that name in the book, except when “paired with a highly amusing surname”. He mentioned the example of a Dr. Purinder Prigshy of Philadelphia, Pennsylvania. I must agree it is quite a funny name, the Bob of India or not. Mr. Howitzer’s knowledge of norms and quirks of languages, cultures and names indeed seems extraordinary.

This is where the transmission cuts off for today. Check back tomorrow for Part Two of this special investigative report.

Co-founder of the Funny Names Blog, Hawaiian shirt enthusiast, and holder of a funny name himself with too many vowels for any sensible person. Currently residing in San Diego, California, scouring through obscure documents on a hunt for more funny names. www.funnynamesblog.wordpress.com
View all posts by Arto →
This entry was posted in Greatest hits, Uncategorized and tagged fiction, funny, humor, names. Bookmark the permalink.