We’ve covered some great hair-related stories here before, but rarely do we get the chance to discuss a true pioneer of the genre.

Ambrose Everett Burnside was, as his Wikipedia page puts it, “an American soldier, railroad executive, inventor, industrialist, and politician from Rhode Island, serving as governor and a U.S. Senator.”

Yet somehow they neglected the two most significant parts of his resume: 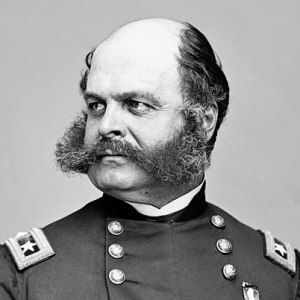 Can you understand why?

Aside from being the ambassador of a cool, timeless historical hairstyle, Ambrose also was quite a likeable fellow in the military. He was great at making friends, and he smiled a lot – you know this must have been A LOT because who notices smiling frequency? – and he apparently remembered everyone’s name.

However, the positive descriptions of his military service end there. He is described as being “obstinate, unimaginative, and unsuited both intellectually and emotionally for high command.”

The funny thing is that Ambrose Burnside knew this, and twice turned down command of the Potomac Army, needing to have his arm twisted before he reluctantly agreed. Those in the know described him as “a simple, honest, loyal soldier, doing his best even if that best was not very good,” and his military leadership suffered due to his extraordinary modesty.

” Physically he was impressive: tall, just a little stout, wearing what was probably the most artistic and awe-inspiring set of whiskers in all that bewhiskered Army. He customarily wore a high, bell-crowned felt hat with the brim turned down and a double-breasted, knee-length frock coat, belted at the waist—a costume which, unfortunately, is apt to strike the modern eye as being very much like that of a beefy city cop of the 1880s.” – Bruce Catton, Mr. Lincoln’s Army

Still, the guy had a very impressive life, and in only 57 years he commanded an army, served a full 6-year senatorial term, and 3 years as governor, and made a lasting cultural imprint.

What was that again? 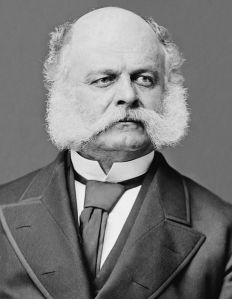 Oh yes, that. You go, Ambrose!