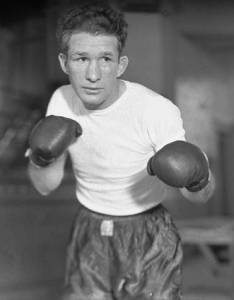 He was a sweet-looking babyface as long as you weren’t looking at him from the other side of the ring.

A week or two ago, Mark sent me a list of some of the best boxing nicknames in history. The list featured such great monikers as Darnell “The Ding-a-ling Man” Wilson and Willie “The Worm” Monroe, but what struck me most about the list is that they overlooked perhaps my favorite boxing nickname of all:

Depending on the source, his nickname may include “Texas” at the end, or be reorganized as “The Sweetwater Swatter,” but in any case, Verlin E. “Lew” Jenkins was a guy that serious boxing fans are aware of for more reasons than his awesome sobriquets.

His back story – beginning as a carnival fighter and working his way up to become world lightweight champion – is the stuff of legend, as were his excessive partying and wild escapades after becoming champion. There are crazy stories about him going months on end without ever going to sleep before dawn, and crashing several cars and motorcycles.

But that’s only part of the Lew Jenkins story. He was also a decorated soldier, serving in WWII and the Korean War, and participating in the D-Day invasion. He was awarded the Silver Star for heroism and gallantry, and saved the lives of several men who were cut off behind enemy lines.

Born in Millburn, Texas (not Sweetwater), Jenkins was a deceptively powerful puncher despite his lanky frame. He had wins over some of boxing’s greatest names like “Sailor” Fay Coskey, Midget Mexico, and “Chief” Evening Thunder, as well as some great boxers like Tippy Larkin, Mike Belloise and Bob Montgomery.

He became world champion by defeating Luigi Giuseppe D’Ambrosio (better known as Lou Ambers) and then defeating Ambers again in a rematch, after Ambers had a tune up fight against Al “Bummy” Davis. That was in 1940. However, Jenkins’ wild side caught up with him, and he lost the title to Sammy Angott in 1941, fighting with an injured neck from a motorcycle accident experienced between fights.

He would never again rise to the great heights he reached during his prime as a top lightweight and welterweight (keep in mind, Jenkins was a world champion at a time when there was only one champ per division), and ended up losing more fights than he won after the loss to Angott. Still, his accomplishments during his prime years were enough to earn him a spot on Ring magazine‘s top 100 punchers of all time list, and recognition as one of the 100 greatest fighters of all time on an ambitious list compiled by some boxing writer who would later become a funny names blogger. (That one boxing article has earned a few thousand more views than the entire Blog of Funny Names)

Jenkins’ later years involved a part-time career as a journeyman fighter, along with some military service, and ultimately a move to Oakland, California, where he passed away in 1981 at age 64. But boxing fans and funny names fans will find it hard to forget Verlin E. “Lew” Jenkins, “The Sweet Swatter from Sweetwater (Texas)”. You go, Lew!

Based out of San Diego, California. Co-founder of the Blog of Funny Names. funnynamesblog.wordpress.com
View all posts by Dave →
This entry was posted in Uncategorized and tagged boxing, funny, history, humor, humour, military, names, sports. Bookmark the permalink.