Crispin Hellion Glover: An Evening With A Man and His Slideshow

This past Friday night, after one heck of a week (and one heck of a FNITN), I had the great pleasure to spend time with Arto & Leslie absorbing some of the wit & wisdom of one Crispin Hellion Glover at the historic La Paloma Theatre in Encinitas, CA.

What a night it was!

For the uninitiated, Crispin Glover is a fairly famous, eccentric actor, known for playing George McFly in Back To The Future, and “Thin Man” in Charlie’s Angels. His IMDB profile provides not only a full list of his 60+ film credits, but also a perfect discussion of what “Crispin Glover” means to film lovers.

While he’s never been a typical leading man, Crispin Glover has distinguished himself as one of the most intriguing personalities in the movie business. His unusual characters and personal projects have inspired a cult-like following that has dubbed him both madman and genius.

I couldn’t have said it better myself. 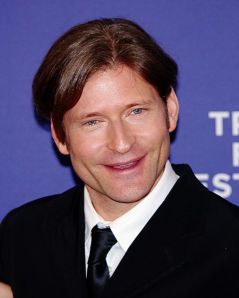 I feel like this is a good Crispin-y expression. He’s such a Crispin!

Anyway, Arto tuned into a Reddit IAmA session with Crispin and got wind of an upcoming tour Mr. Glover has been embarking on. The show is called “Crispin Glover’s Big Slideshow” and includes so much more. It gave the three of us an evening we will never forget.

It began with a tasty veggie burrito from Raul’s (vegan-friendly) taco shop, and then we went across the street to find a line at least 150-strong of Crispin loyalists. The man has a more rabid following than I would have expected. While in line we watched his extremely weird music video Clownly Clown Clown on my cell phone, and then sat down in our seats with blank, open minds.

The lights went dark, then a red spotlight appeared, and out walked Crispin, decked in a full tuxedo with vest. He entered into a 45-minute long slideshow that he enthusiastically dictated to us, flailing his arms for emphasis, making use of the full stage, and reading random excerpts from various stories he had written – 8 in all. At two points, he went into full-fledged German screaming, and the guy’s stamina and energy level were ASTOUNDING!

Then we got to the feature film, entitled It is Fine! Everything is Fine, part 2 of Crispin’s to-be-completed trilogy of off-the-beaten-path film projects. Everything is Fine was the brainchild of Steven C. Stewart, a man with extremely severe cerebral palsy – wheelchair-bound, difficult to understand, and confined to a nursing home for much of his life.

Tired of Hollywood’s depictions of disabled people as benefactors to society, Steven C. Stewart wrote a script starring himself as the central character in a 70’s style TV murder mystery. Let’s just say that the sexual, deviant film was far from the standard Hollywood movie fare.

There’s a reason for this: Crispin Glover has a mission to expand film beyond Hollywood’s restrictive censorship, which basically excises from films anything that might offend or disgust moviegoers. So he invested his paycheck from Charlie’s Angels into the making of this film, which was a challenging and interesting film experience unlike anything I’ve experienced before.

After the movie, there was a veritable Crispin-fest. He fielded questions from the audience for hours, told humorous anecdotes about Bill Murray, ran into the aisles and up to the projection booth to show us 10 minutes of the trailer for his newest film, and continued to field questions from the audience. 4.5 hours into the evening, with midnight approaching and needing to teach a class at 9am on Saturday, I had to leave, but I wouldn’t be surprised if Crispin kept going for hours after that. The man is a workhorse. A peculiar, fascinating, free-thinking (and only slightly unhinged) workhorse, and a night with Crispin is an experience to remember. 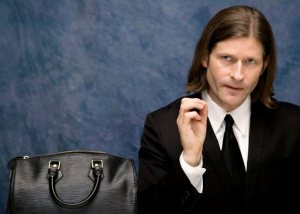 I feel like this sums the guy up fairly well. Kind of. He really defies explanation.

Based out of San Diego, California. Co-founder of the Blog of Funny Names. funnynamesblog.wordpress.com
View all posts by Dave →
This entry was posted in Uncategorized and tagged art, Crispin Glover, entertainment, film, humor, humour, names. Bookmark the permalink.

8 Responses to Crispin Hellion Glover: An Evening With A Man and His Slideshow