Blog of Funny Names first reeled me in because 1) it made me laugh and 2) it was not about food. Because food is my profession and obsession, I tend to immerse myself in all things culinary. Blogging is no exception and most blogs I read and follow are food-focused.

Which is how I come to you with the authority to say that there is a boatload of banana bread recipes in the blogosphere. Everywhere you click, you find banana bread. You’ll see traditional loaves as well as versions featuring browned butter, bourbon, vegan ingredients, chocolate, gluten-free flours, flax seed, whole grains, cake mixes, chia, nuts, etc. It seems there is no end to the variety of banana breads that can be created. I’ve written up banana bread myself multiple times and will always jump at any new recipe that comes along.

Cap’n Dow Baker and his beard

Banana bread fever aside, I’ve learned that I can’t just talk food when my turn comes round at BoFN. Funny names must be involved. So as my monthly post drew near, I wondered if the person we had to thank for banana bread might have a funny name. Unable to find any one individual credited with inventing banana bread, I expanded my search to anyone who helped bring bananas into being. And that is how I found my man.

Captain Lorenzo Dow Baker was an American sailor and businessman whose travels from the Orinoco to Jamaica and finally to Boston are said to have launched the modern banana production industry. No kidding. He launched the industry that made all blogosphere banana bread possible. He is the Banana King.

It began in 1870, when young Captain Baker returned from Jamaica with lots of bananas–160 bunches to be exact. Unfortunately, said bananas were spoiled when he arrived. So Baker returned the next year to bring home a cargo of green bananas. As bananas do, they ripened to a lovely yellow-gold, encouraging Baker to buy more boats and expand his banana fleet.

In 1881, Baker and his brother-in-law, Elisha Hopkins, organized L.D.Baker and Co. in hopes of selling more bananas. Four years later, they offered public stock in their Boston Fruit Company, which in 1899 became United Fruit Company. Eventually United Fruit became Chiquita Brands International, known for its little blue stickers and the logo of the lovely lady with fruit on her hat. 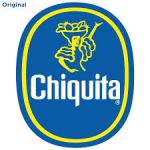 the lady with fruit on her hat

To celebrate Captain Lorenzo Dow Baker, I urge you all to overbuy bananas and make a loaf of this classic quickbread favorite. You’ll have no shortage of recipes to choose from.