In the velvet darkness of the blackest night
Burning bright, there’s a guiding star
No matter what or who you are.

(Lyrics mutilated with apologies to The Rocky Horror Picture Show.)

Yes, Frankenstein has had a long and storied history since Mary Shelley, at the tender age of 18 nearly 200 years ago, set out to write the spine-chilling novel that would launch not only the science fiction genre but also that humongous sub-genre of Franken horror we all know and love so well.

Dating back not quite so far but still pretty darn far is the sleepy little town of Frankenstein, Missouri. It received the name Frankenstein in 1889, probably after Gottfried Franken, a major donor of land, but the town had actually been established about a quarter century earlier as a parish of German Catholics.

A whole lot of Frankenstein happened to the world between then and now, whilst this tiny hamlet continued more or less unperturbed as a quiet, hardworking, tight knit farm community. But a convergence took place in 1999 when the town was . . .

As they leaped from the plane they yelled, “Putting on the Ritz” and landed in the Frankenstein Community Ball Field.

The re-dubbing must have been very temporary as it is denied by more knowledgable area residents, and may be an urban legend.

As you might guess, Halloween season has a special claim on this town, and more than a few people visit it, in any season, to get trophy pics like this. 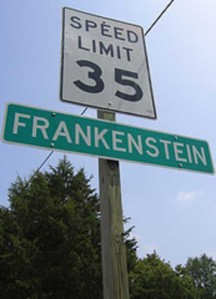 But one chapter of our story remains unwritten: a kickstarter movie project called Frankenstein, Missouri, under production by the independent filmaking group Moonhunt. The film’s ominous tag line “It Exists” refers to more than just the town . . .

Pets are disappearing from backyards in Frankenstein, MO, and people want to know who the culprit is. Could it be Momo, the infamous Missouri Monster, hungry for a midnight snack? Or could it be the result of a murderous cult’s animal sacrifices? Two young filmmakers set out to solve the mystery in an attempt to exploit the town for their own gain. But when they uncover the truth, they get far more than they bargained for.

Or let the trailer speak for itself:

Naturally, we’ll let the last word go back to The Rocky Horror Show.

The darkness must go down the river of nights dreaming
Flow morphia slow, let the sun and light come streaming
Into my life, into my life.