Willie Harcourt-Cooze and Chocolate for Everyone!*

I also like greatly named chocolate entrepreneurs, which by default makes me a huge fan of a certain Willie Harcourt-Cooze.  You see, Willie is a London- born man with a true passion for chocolate. The product of a Burmese father and an Irish mother, you could have guessed he would have some globe-trotting in his future. 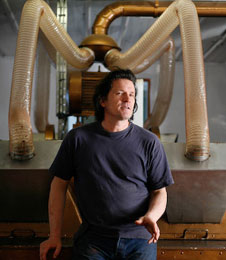 Sure enough, on a honeymoon trip to Venezuela, Willie was talking to a beach umbrella salesman, who for some reason directed him to a lovely piece of land in the neighborhood. He instantly fell in love with the place there and eventually made it his own, turning 1000 acres into a full fledged cacao farm. Since 1998 Willie has been making 100% cacao bars from trees in the property.

The beans are packed up in Venezuela and sent to Willie’s Wonky Chocolate Factory in the town of Uffculme in southwest England. There they are roasted, winnowed, ground, refined, conched, tempered and wrapped, some of which are activities I have heard of before. But hey, the important part is, at the end of this, we all get to eat a delectable chocolate bar. Sorry, a Delectable® chocolate bar. 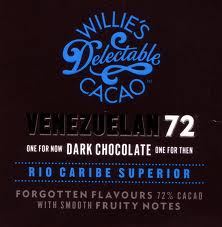 Mr. Harcourt-Cooze’s journey has been such a fascinating one, it’s even been documented in pun-tastic reality TV shows such as Willie’s Chocolate Revolution : Raising the Bar. And that’s A-OK with us. Thanks for the chocolate, Willie!

PS. *there’s no chocolate for everyone. Sorry.

Co-founder of the Funny Names Blog, Hawaiian shirt enthusiast, and holder of a funny name himself with too many vowels for any sensible person. Currently residing in San Diego, California, scouring through obscure documents on a hunt for more funny names. www.funnynamesblog.wordpress.com
View all posts by Arto →
This entry was posted in Uncategorized and tagged chocolate, funny, funny names, humor. Bookmark the permalink.

9 Responses to Willie Harcourt-Cooze and Chocolate for Everyone!*