As the centenary of his birth approaches (May 22, 1914), we honor Sun Ra, born Herman Poole Blount, legally named Le Sony’r Ra, and going also at various times by the names Le Sonra and Sonny Lee.

That’s a lot of names, but a mere fraction of the number of albums (over 100) or songs (over 1,000). Sun Ra was among the most prolific recording artists ever. He was also one of the first to adopt the electric piano and synthesizer, and to self-produce and distribute his own music–now standard practice in the techno and hip-hop worlds. He has influenced a vast number of musicians, from Daft Punk to Lady Gaga, who sampled Sun Ra in her song “Venus.” 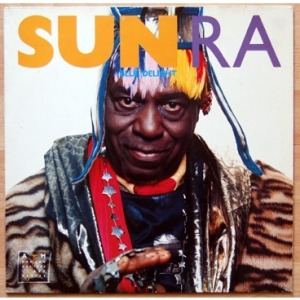 “I never wanted to be a part of planet Earth, but I am compelled to be here, so anything I do for this planet is because the Master-Creator of the Universe is making me do it. I am of another dimension. I am on this planet because people need me.”

I groove on this older stuff, including the accessible Jazz in Silhouette (1967). But I confess, the wilder more theatrical work is a struggle. I feel the same about Captain Beefheart, another explosively creative outsider who paralleled Sun Ra in many ways (though by all accounts he was a lot less likeable as a person). But also like Beefheart, the music can definitely grow on you.

Was Sun Ra simply ahead of his time, or beyond space-time itself? Space themes suffused his music and poetry, as well as the flamboyant stage act and costume design of the Arketsra–the only jazz band to tour with its own tailor. Sun Ra famously claimed extra-terrestrial origins.

Sun Ra was a deeply spiritual man. An unyielding pacifist, he was jailed during WWII after an unsuccessful application for conscientious objector status. His philosophy, a system of “equations,” was a kind of gnostic syncretism encompassing Freemasonry, Egyptology, black nationalism, Astral New Ageism, and other elements inlcuding Afrofuturism (another movement he anticipated by decades). His cryptic comments were sometimes said to resemble Zen koans, triggering profound insights when recollected later.

Sun Ra passed from this world May 30, 1993, travelling on, we hope, to a much better one. Back on earth, posthumous compilations of Sun Ra’s music keep pouring out, and the Arkestra keeps on playing (quite a tight rhythm section IMO).

Like Loading...
This entry was posted in funny names in music and tagged humor, humour, jazz, music, musicians, Sun Ra. Bookmark the permalink.