Many of you know I no longer watch television. So it may come as a surprise, that today’s post is inspired by the cancellation of a television show: Raising Hope.

For me, the gem of the show was “Maw Maw,” played by Cloris Leachman. This woman possesses quite a performance pedigree.

Let’s start at the beginning. Born to Berkeley Claiborne “Buck” Leachman and Cloris (Wallace) Leachman on April 30, 1926 in Des Moines, Iowa. I loved that she was named after her mother.

She won the title of Miss Chicago in 1946 putting her squarely in the 20th Miss America Pageant. It’s not surprising her film and television career started shortly after.

She majored in Drama at Illinois State University and Northwestern University, becoming a method actor. You may have noticed her love of props.

Let’s not forget the crop of classmates who graduated from Northwestern University with her. They include Paul Lynde, Charlotte Rae, Martha Hyer, Patricia Neal, and Agnes Nixon. Now that’s some crowd.

Her mantel must be large, because so far during her career she won 8 prime time Emmys and one daytime Emmy; and an Oscar for Best Supporting Actress in The Last Picture Show. Lest we not forget the Golden Globe for Phyllis. There are a few others sitting close by.

A very small sampling of her TV credits include: Mary Tyler Moore Show, the spin off Phyllis (which was cancelled after season two because three of the regular cast members died), Malcolm in the Middle and Raising Hope, which left the air waves in April of this year.

As I’m a fan of Mel Brooks, how can I not mention Frau Blücher in Young Frankestein (Okay, I have to say it: Remember the violin and the line, “He vas my boyfriend”), Nurse Diesel in High Anxiety and Madame Defarge in History of the World: Part I.

Her sense of humor has taken her where few would dare tread. She spoofed the Demi Moore Vanity Fair magazine cover photo by posing nude on the cover of Alternative Medicine Digest wearing only body-paints with images of a fruit. You go, girl!

So what’s next? Maybe AARP will have an inaugural swimsuit edition, in which they put Cloris on the cover. I’d buy it. 🙂 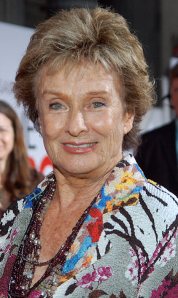 Then there is my favorite film you’ve never heard of: The North Avenue Irregulars made by Disney in 1979. The crux of the story is crooks move into their town to set up shop, the minister and a group of church ladies are willing to do anything, no matter how wacky, to get the crooks out of town.

Shall we watch one of my favorite movie moments together? The set-up, Cloris’ character, Claire—a.k.a. Phantom Fox, is at her regularly scheduled appointment at the beauty parlor getting her nails and hair done. She gets called into action earlier than planned because the criminals moved up their schedule. She dashes out of the beauty parlor, mid-appointment, in the hopes of delaying the crime boss from taking over the town.

Take it away Cloris:

Freshly manicured nails are such a terrible thing to waste. 😉

Props to you Cloris!

Writing since she could first hold a pen, Tracy Perkins formed her alter ego, "Fannie Cranium" at the suggestion of her husband. Tracy understands smiling makes people wonder what she’s been up to.
View all posts by Fannie Cranium →
This entry was posted in funny names in movies, funny names in tv and tagged actors, biography, comedy, funny, humor, humour, tv. Bookmark the permalink.