Recently on my own blog, I mentioned inspiration comes from the strangest places. I referred to the following quote:

“There are many things in life that you cannot control, but you can always control your attitude toward them. Defeat is never permanent unless you allow it to be so. When you have a positive attitude, you will recognize failure for the impostor that it is and realize that it is really a learning experience, a valuable lesson that will help you succeed with the next attempt.

Ask yourself: What could I have done differently that would have altered the outcome? What can I do in the future to minimize problems and mistakes? What did I learn from this experience that I can put to good use next time? If you approach obstacles and setbacks with a positive attitude, you will be surprised how quickly you can turn defeat into victory.” ~ Napoleon Hill 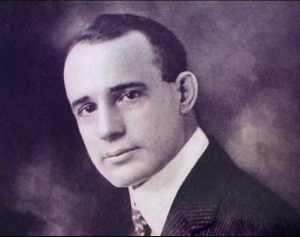 Napoleon Hill. At 5’6″ tall, he never met his Waterloo.

Napoleon Hill was born in Appalachia, in Pound, Wise County, Virginia, October 26, 1883. His mother died when he was nine. His father remarried. The new Mrs. Hill possessed no interest in poverty. She took over the family farm and store, sent her husband to school to become a dentist at the age of 40, and turned up the heat on young Napoleon forging in him a sturdy back bone. He thanked her in his first book.

By age 13, Hill started his writing career as a “mountain reporter” for the local newspapers of Wise County.

He used those earnings to enter law school, however, he soon withdrew for lack of earnings. He returned to journalism. His big break came in 1908, at the age of 25, when he was assigned a commission to write a series of success stories about the foremost business leaders of the time.

His first interview, Andrew Carnegie. After three days of interviews with the steel baron, Carnegie challenged Hill.  Would he be interested in compiling the practices and beliefs of the current business giants into a coherent philosophy without any payment?

Five hundred interviews later, he distilled those philosophies into “The Magic Ladder to Success”—published with Carnegie’s help at the outset of the Great Depression. The book sales went the way of Wall Street in 1929.

Not discouraged by the lack of sales of his first book, he followed his own advice “What the mind of a man can conceive and believe, it can achieve.” He worked for seven years and tantalized readers with his secrets for achievement in his next volume. His publisher wanted to change the name of the book to “Use Your Noodle to Earn More Boodle!” Glad the K.I.S.S. philosophy won out . . . “Think and Grow Rich”—remains a perennial best seller to this day. That’s Pound Wise if you ask me.

No stranger to adversity, his businesses went bankrupt, he made and lost fortunes, he married several times, and was falsely accused of fraud and imprisoned. His son, Blair, was born without ears. By the time he reached his fifties, he experienced his first decade without a major adversity. Hill’s life was filled with those it seems to be bad, yet turned out to be good stories—lending more power to what he practiced and preached.

20 Responses to Napoleon Hill, A Pioneer for Personal Success