Colin Ferguson: the one where we (almost) didn’t talk food

Hello, Blog of Funny Names fans and welcome to this month’s Funny Names in Food post. It’s time to come clean: It’s getting harder to find funny food names. Despite what King Dave says, there just aren’t that many funny names (of interest, anyway) in the food world. The entertainment industry? Oh man, they’re all over. And sports? Pshaw–everywhere (especially boxing, right Dave?). Our music expert, Diddy, has found numerous funnily named individuals on Yoot Oob. (He came to BoFN because of his obsession with Caroline Charonplop Kyary Pamyu Pamyu–how can I top that?)

So. I almost pulled an amb and went on about an actor (!) in a new-found TV favorite. Sci fi fans have known about Eureka for ages as it went off-air only a few years ago. But I just recently stumbled upon it and have gone head-over-in-heels crazy in love with the show. A bit Dr. Who, it’s based more on reality (read: no aliens) and is full of suspense, romance, laughs, great special effects, twisty-turny jaw-dropping storylines, and beautiful people.

Hunky Sheriff Jack Carter, played by Colin Ferguson, struck me as a potential funny names candidate, so I ALMOST told you that he’s a Canadian-born actor. I almost shared that he grew up in Montreal, Hong Kong, England, and Connecticut and has Canadian, British, and American citizenship. Perhaps I might have noted that his time in Montreal gave him a good handle on that French language, so our Mr. Ferguson is bilingual. Just shy of six feet, he totally qualifies as that “tall drink of water” women tend to swoon over. (Though happily married, I still swoon over Mr. Ferguson myself.) 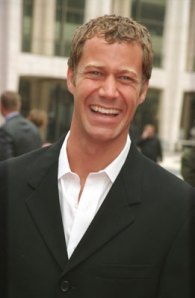 Had I decided to venture outside of my food world here, I’d have mentioned that Mr. Ferguson was once a member of the Montreal improv group, On the Spot. His professional acting roles include appearing in films alongside Christina Ricci, Lisa Kudrow, and Lyle Lovett (The Opposite of Sex) and Diane Keaton (Because I Said So). (Though I wasn’t so keen on checking out his appearance in Lake Placid 3–eek!) He also had that lead in Eureka and was guest presenter for sci-fi news show HypaSpace. (Had I told you this last bit, though, I wouldn’t have known of what I spoke as outside of Dr. Who and Eureka, I don’t know sci fi.)

In what seems a strange–albeit extremely profitable–move, Mr. Ferguson was chosen as the latest (and decidedly hottest) Maytag repairman. He’s actually quite entertaining in these commercials (watch them here–seriously, do) and I’m thrilled to have finally found a food connection for Mr. Ferguson. (Maytag=refrigerators=food. Yes?) This means I do not have to scrap all that I’ve written and hunt down that increasingly elusive funny name in food. My work here is done–phew! Enjoy Mr. Ferguson and I’m off to start hunting down next month’s name.

43 Responses to Colin Ferguson: the one where we (almost) didn’t talk food