We’ve covered many fine Dutch names on this blog before, from Cornelius Drebbel to Kees A. Schouhamer Immink and Guus Hiddink. But today’s subject may just have the best name of them all.

Yes, you read that right. This marvelous name belonged to the Dutch physicist and astronaut, who for one thing held the distinction of being the first Dutchman to visit space. This may also qualify him to enter the race for Funniest Named Person to Visit Space, right up there with Buzz Aldrin and Ham the Chimpanzee. 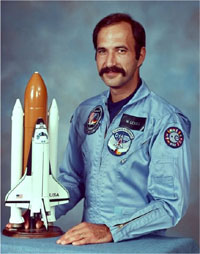 Ok, Wubbo is clearly the best name ever to visit space.

Born in March of 1946 in the Netherlands, young Wubbo had his PhD in Physics and Mathematics by the time he was 32 , doing experimental work at the Nuclear Physics Accelerator Institute. This to me sounds like the setup of all of those comic book heroes who are exposed to gamma rays or something and suddenly have the ability to lift large buildings or turn any object into potato chips.

Wubbo, however, never did have a gamma accelerator accident, and instead was eventually selected by the European Space Agency for their astronaut training program. Or programme, as they may well prefer it. His dream of space travel came true in 1985, rocketing out of the Earth on the  STS-61A Challenger. Clearly they never named the spaceships quite as catchily as the astronauts.

The International Astronomical Union later found his name as great as we do, and named a small planetoid in his honor, the 9496 Ockels orbiting between Mars and Jupiter. Go ahead and pay it a visit next time you have some vacation time. I hear it’s nice and quiet out there.

In his later years, Mr. Wubbo Ockels continued to sport his fine mustache, and taught aerospace engineering at the Delft University of Technology in his native Netherlands. He was also intimately involved in the development of super-fast public transport technology called Superbus, as well as some very promising energy harvesting systems referred to as Airborne Wind Energy. In short, Wubbo Ockels was one smart, awesome dude.

15 Responses to Wubbo Ockels – in Space!