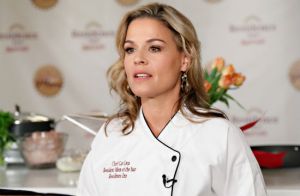 Successful, smart, gorgeous, AND a good cook: Cat Cora is a quadruple threat.

Food Network junkies already know Cat Cora. For the rest of us (despite my addiction to all things food, I haven’t watched a cooking show since canning cable a few years back), let’s look more closely at Miss Catherine Ann “Cat” Cora.

Cora made history in 2005 as the first female to win the title of Iron Chef America. But her hard work in the culinary field started long before that.

Born in 1967 in Jackson, Mississippi, Cora was introduced to the food world as daughter and granddaughter of restauranteurs. Her father Sprio’s Greek heritage and her own southern roots are reflected in much of what Cora does in the kitchen even today.

A decision to enroll at Culinary Institute of America came only after receiving a Bachelor of Science degree in Exercise Physiology and Biology at the University of Southern Mississippi. Her television debut came later (1999) with Food Network’s Melting Pot. In 2004, she co-hosted Food Network’s reality show, Kitchen Accomplished. That next year was especially busy: Besides her Iron Chef win, Cora co-founded Chefs For Humanity, “a grassroots coalition of chefs and culinary professionals guided by a mission to quickly be able to raise funds and provide resources for important emergency and humanitarian aid, nutritional education, and hunger-related initiatives out in the world.”

She continued to balance her food persona with that of humanitarian when named Executive Chef at Bon Appetit magazine as well as spokesperson for UNICEF in 2006. In 2008, she ventured into gaming territory by voicing a role for the video game Iron Chef America: Supreme Cuisine. (That there is such a thing blows my mind.)

Inducted into the Culinary Hall of Fame in 2012, Cora has an amazing resume of which we’ve hardly touched on. It would take far too long to go over it all, so let me instead send you here for her restaurants and here for cooking shows. As well, she has a cookware line, cookbooks, and specialty ingredients, all found on her website.

Personal note: My family was lucky enough to enjoy a meal at Cora’s Kouzzina on Disney’s Boardwalk in Orlando, Florida. There, my oldest daughter enjoyed her first Greek lasagna and I had a cocktail I’ll never forget. The Smoked Turkey blended whiskey (Wild Turkey, of course), black cherry bourbon, grenadine, lemonade, hickory smoke (just a hint), and a garnish of Luxardo gourmet maraschino cherries. It was amazing. Sadly, Kouzzina–Greek for “kitchen”–will close its doors on September 30. 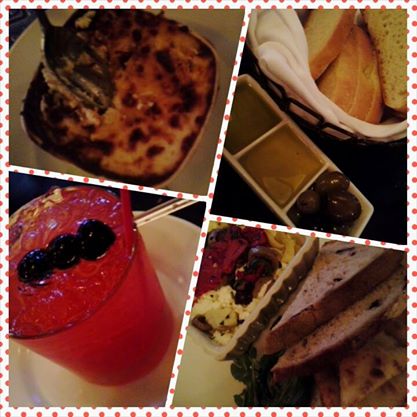 Unable to leave my food blogginess behind, I’ll add a big ol’ photo of our food at Kouzzina.

Busy professionally, Cora is also busy at home with her four kiddos: Zoran, Caje, Thatcher, and Nash–each a contender for future BoFN posts. While parenting is never straightforward or easy, Cora and her wife went the extra mile by each carrying at least one of their babies. Which underscores a quote attributed to her at BrainyQuotes.com:

Even when you have doubts, take that step. Take chances. Mistakes are never a failure – they can be turned into wisdom.

Through her work as a chef, restauranteur, culinary entrepreneur, television personality, humanitarian, mom, and wife, Cora has repeatedly been willing to take huge risks. And without these risks, the culinary world would be that much poorer. Go, Cat Go!